At the Movies: Super 8 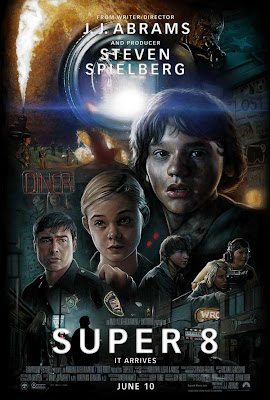 Director J.J. Abrams new film "Super 8" set in 1979, tells the story of a group of children who while filming their own Super 8 movie for an upcoming competition, are present as a speeding train derails, releasing a dangerous alien into their town. Partly in homage to pop culture films of the 70's and 80's, "Super 8" is produced by Steven Spielberg, whose earliest blockbuster films are the spiritual predecessors to this excellent summer popcorn flick.
For my money, Super 8 proved to be a winner. Where as some critics take it to task for being too reverent of old-school films, I felt that the framework of the movie was in many ways superior to past hits that Super 8 has tried to reflect. Think about it, in movies like Gremlins, Close Encounters of the Third Kind, etc., often things were fairly normal for the central characters and the intruding supernatural element was the primary aberrant event that occurred in the paradigm of those stories. Remove the creature, restore the balance at the end, and things go back to the way they were.
In Super 8, the central characters lives have all been wrecked by a personal tragedy that binds this little community together and the appearance of an extraterrestrial threat, as huge as it is, is quite secondary to the ripples affecting these peoples lives. Like Spielberg before him, Abrams has found a young cast of actors to make you pine for, and they do so brilliantly. Elle Fanning stands out as the brightest of this young group and her facial expressions alone reveal much pain that the films dialogue doesn't exactly express. Pay close attention to her for "additional" information that is in effect only inferred by her fine performance. It will make you think about missing information relative to her family, that otherwise could have been simply stated in the regular dialogue. Whether this subtlety was intended or not, it worked for me. And that's not to minimize Joel Courtney's lead role of young Joe Lamb. He is the "everyman" through whose eyes we experience this story, and he is terrific.
Kyle Chandler plays his workaholic deputy-sheriff father, unable to relate to his son, who had been largely raised by his recently deceased wife, and Ron Eldard, as little more than the town drunk (and who may have inadvertently caused the death of Joe's mother), appears more sympathetic once the reasons behind his self-destructive behavior emerge. Of course, this is a big budget creature feature and Abrams effectively utilizes this beast to great effect. I was pleased that the monster was ever so slowly revealed throughout the movie and not overly relied upon. It made that aspect more "real" to me. At the conclusion, the arrival of the alien itself creates an opportunity in which Joe and his father, and Alice and her father, find closure, peace and forgiveness. The bonds that they establish will carry them forward better than they were and the beauty of "Super 8" is that even then, the creature feature aspect remains secondary to this stronger element of the story. Nice!
Super 8 won the weekend box office battle with a more modest haul than expected, but given that huge blockbusters roll out weekly during the summer months, they can't all go to the head of the class. Don't miss out on this film, its overall story is a bit quieter than may be expected, but all the more effective as a result. Recommended!
Posted by Chuck Wells at 12:01 PM

This was a GREAT movie - harkens back to the glory days of such Spielberg films as ET and The Goonies. My only complaint is that Abrams overdid it against with the dad-gummed lens flares - what is his thing with this, anyway? That aside it's well worth the cost of admission, which just isn't the case with most movies these days no matter what the genre.

You hit the nail on the head with your review of Super 8, Chuck! You summed up central theme of the film when you state “the beauty of "Super 8" is that even then, the creature feature aspect remains secondary to this stronger element of the story.” If there is such a thing as Humanist Adventure SF, then J. J. Abrams has created it with his continued flair for using the structure of science fiction (e.g.: Star Trek) to demonstrate the positive potential of humanity. Although Abrams does commit to creating a truly menacing alien, he seems to be far more interested in the human story of a father and son who are dealing with the devastating loss of their wife/mother.

For our generation, Super 8 is a nice nostalgic trip to the late 70’s. I do wonder what younger viewers who were not even born in 1979 think of Super 8’s setting. I like to think that the kids of ’79 aren’t much different than the kids of ’09, ’10 or ’11, but I fear that they might find this time period as alien as the late 40’s are to this child of the 60’s. I applaud Abrams for his artistic integrity to set Super 8 in the 70’s – obviously a time of his youth – because he might have had more commercial success with a contemporary setting. Here’s hoping that good word-of-mouth will give Super 8 a long prosperous theatrical run