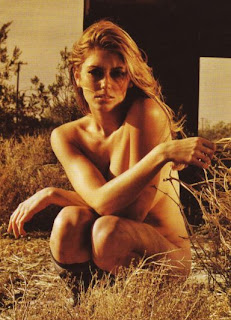 native Diora Baird has made a name for herself among the usual sources that an up & coming actress-model can typically be discovered in: viral websites, video game voice-work, cheesecake photos in Playboy, FHM, Maxim, etc.  Her television credits include The Drew Carey Show, Big Day, Shark, The Loop, Two and a Half Men, and this weeks episode of “Psyche”.
Diora’s theatrical releases include Wedding Crashers, The Texas Chainsaw Massacre: The Beginning (2006), 30 Days of Night: Dark Days, and Night of the Demon. In 2009, Baird portrayed an Orion Starfleet officer in “Star Trek” directed by J. J. Abrams, but her brief appearance was cut from the final version of the film. She can be seen in the deleted scenes on the home video release. 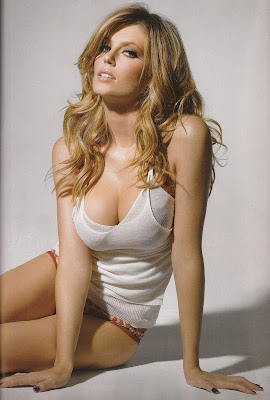 Her wholesome, girl next door good-looks combined with her stunning natural figure really make her one to watch; and it amazes me that she hasn’t been given more screen time. Hey, if you want to spend some pleasant minutes surfing the web, just do a Google image search in her name and enjoy the variety of shots of this weeks awesome “gal” Friday selection. She doesn’t take a bad photo!
Posted by Chuck Wells at 12:18 PM

I know nothing about her, but that second picture there. . ? Dear God, a man could die a happy man a-resting in that bosom!

Joe, as a head up, google her Playboy spread to check those cannonballs out in all their glory.

It's funny how you described my preferred way to ease into the sunset; a-resting my face in that special place really does seem like the perfect way to die a happy man.

I admittedly hold a bitter hatred towards whatever lucky S.O.B. gets to spend some "happy time" alone with Ms. Baird.

I know what I want for Christmas.

Wanting it won't make it happen, but I DO feel your pain on this one.

I would be one happy, happy man to settle down with this lady.