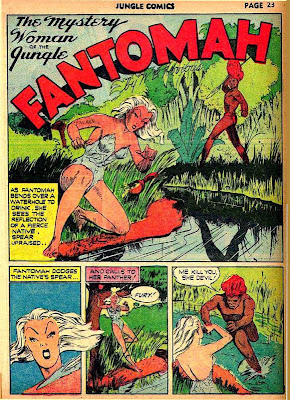 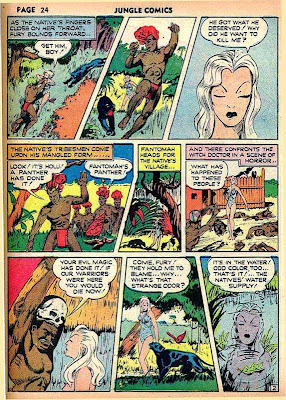 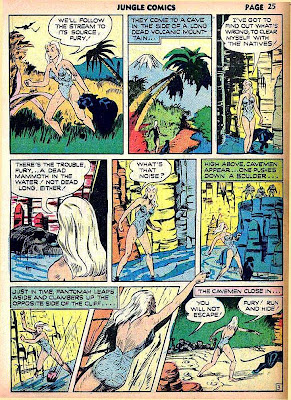 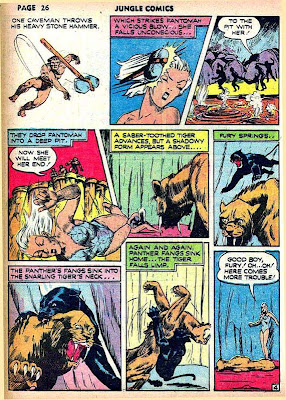 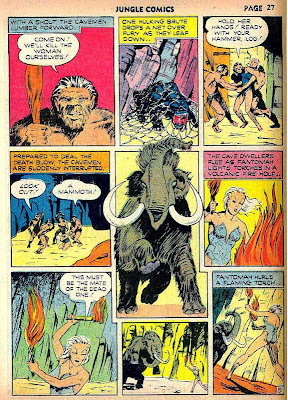 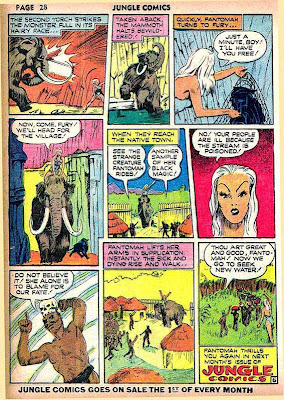 Although she began her golden age career as a super-powered, fright-visaged "Mystery Woman of the Jungle" illustrated by Fletcher Hanks, Fantomah later changed her appellation to "Daughter of the Pharaohs." In between those vastly differing roles, she starred for a time as a garden variety jungle girl (albeit with lingering supernatural elements) in tales like today's previously untitled adventure that I've dubbed "The Waterhole Mystery" from Jungle Comics #22 (Oct.1941); originally published by Fiction House and illustrated by Jim Chambers (per the GCD, but the art still looks like the work of Robert Pious to me). The Catacombs is grateful to Don "Zu-Gogo" Falkos for providing the scans for this story. Note: The copyright for this issue, its contents and artwork belongs to the original publisher and/or creators, and is reproduced here solely for entertainment purposes. Enjoy!
Posted by Chuck Wells at 12:50 PM

I'm not that familiar with this version of Fantomah. They seem to be in Africa and suddenly there are white-skinned cavemen and North American extinct species like the woolly mammoth and the saber-toothed cat. And Fantomah acts like that's normal. At first I thought they were hallucinations produced by poisoned water, but no.

Fantomah endured three distinct golden age interpretations. The original Fletcher Hanks riff was sorta bizarre like his other characters (Stardust, Tabu), but this was the most interesting of the bunch (if you like wonky stuff). Then came her brief jungle girl look, blah-blah-blah, and finally she transformed into an armor-clad Daughter of the Pharaohs.