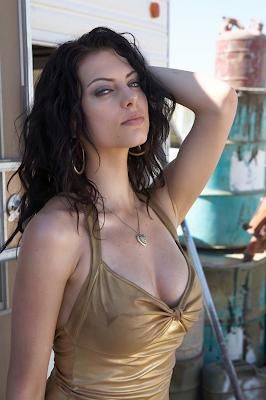 Canadian model and actress Julia Voth first served as the character model for "Jill Valentine" in the 2002 video game Resident Evil, and then continued in that capacity for subsequent expansions in the series. She has appeared on television in episodes of Castle and Supernatural, along with a few feature films such as Bitch Slap. Today she joins a select ensemble of cuties as this weeks official "gal" Friday.
Posted by Chuck Wells at 10:53 AM

She should have been the new Wonder Woman

Gal Gadot who was recently cast for the role of Wonder Woman in the next Man of Steel film, is a lovely and talented girl; but yes there are at least a half dozen better candidates for the role. You've somewhat busted me for the "how's & why's" of her "Gal" Friday selection; as I instantly felt the same way as you when I firt sw her photo!