Mark Schultz celebrated series Xenozoic Tales is set in a post-apocalyptic future where Earth has been ravaged by pollution and natural disasters. Humanity has built vast underground cities in which they have lived for approximately 600 years. Upon emerging, they discovered that the world had been reclaimed by previously extinct lifeforms including dinosaurs. In this new 'Xenozoic' age, technology is extremely limited and those with mechanical skills command a great deal of respect and influence.

The two main characters are mechanic Jack Tenrec and scientist (and love interest) Hannah Dundee. Tenrec operates a garage in which he restores cars, particularly Cadillacs. Given that the post-apocalyptic world no longer possesses the ability to refine oil, Jack modifies his cars to run on dinosaur guano. These cars, of course, are frequently chased by rampaging dinosaurs in pulp style action-adventure stories. Publication began in 1986 with a story in the comic anthology Death Rattle. This debut was shortly followed by Xenozoic Tales #1 in February 1987. The comic series ran for 14 issues from several publishers including Kitchen Sink Press, Marvel Comics and Dark Horse Publications. 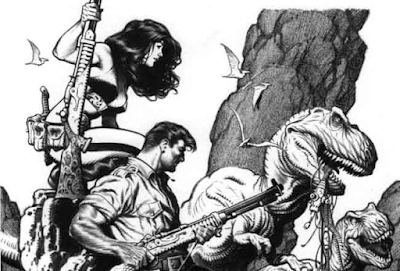 I believe I have come to the conclusion that this is the best comic ever (for me).