Loeb & Alexander get axed from Heroes! 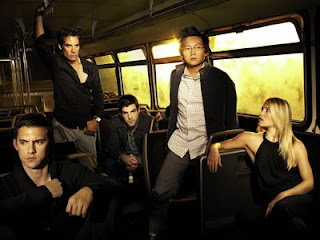 In a major development that hopefully signals a positive sign that at least someone is paying attention to the rapidly declining fan interest in NBC superhero-comics-genre show, Heroes, two of the show's most instrumental writer/producers, are leaving the three-year-old series.
Jeph Loeb and Jesse Alexander, who appeared to be Tim Kring's chief lieutenants on the "Heroes" writer's staff, have been axed by the network. Both scribe-producers had been with the show since its first season and were known to have led the day-to-day production operation under the direction of creator/exec producer Tim Kring.
Jeph Loeb has known Kring since the pair worked together on the screenplay for 1987's "Teen Wolf, Too." A comic book writer and four-time Eisner Award winner whose career includes work on many major characters since 1991 (Spider-Man, Batman, Superman, Hulk, Captain America, Cable, Iron Man, Daredevil, Supergirl, the Avengers, and Buffy the Vampire Slayer, much of which he has produced in collaboration with artist Tim Sale, who also provides the comic artwork seen on Heroes), Loeb wrote his first teleplay for "Smallville" in 2002 and spent half a season at "Lost" before Kring brought him aboard "Heroes." Loeb scripted the "Heroes" second-season finale, "Powerless."
Jesse Alexander wrote for all five seasons of "Alias" and also worked as executive consultant and co-executive producer on the first season of "Lost" before joining "Heroes." Alexander scripted last week's episode, "Eris Quod Sum."
There is no new episode this week. Heroes will return with new programming next Monday.
Posted by Chuck Wells at 7:01 AM

I am trying SO HARD to get into this season of Heroes. really, I am. but, I just can't do it. every time I watch the new episode, I sit there grumbling to myself that things ain't what they used to be. maybe, just maybe, this'll be what the show needs.