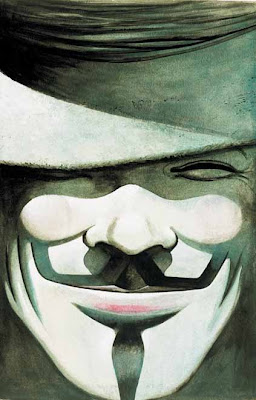 1605
The Gunpowder Plot failed when Guy Fawkes was seized before he could blow up the English Parliament. You may remember this true story formed the basis for the character V's motivation in the comic book mini-series & graphic novel, V for Vendetta, originally written by Alan Moore and illustrated by David Lloyd and published in Warrior, the British series was later collected by DC Comics (or perhaps you caught the fine movie based upon same, starring Natalie Portman & Hugo Weaving).
Posted by Chuck Wells at 1:09 PM