From the Dust Bin: The "Golden Age" Sandman 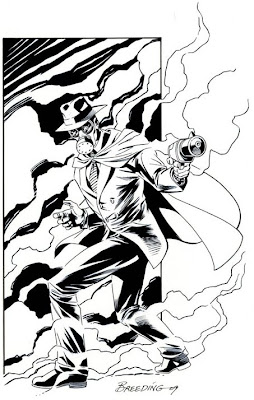 Sandman (Wesley Dodds) was the first of several DC Comics characters to bear the name, he was created by writer Gardner Fox and artist Bert Christman. Wearing a green business suit, fedora, and gas mask, the Sandman used a gun emitting a sleeping gas to sedate criminals. He was one of the original mystery men to appear in comic books and other types of adventure fiction in the 1930s but he later developed into a more proper superhero, acquiring sidekick Sandy and joining the Justice Society of America.
The character's first appearance is usually cited as Adventure Comics #40 (July 1939), but he also appeared in DC Comics' 1939 New York World's Fair Comics omnibus, which historians believe actually appeared on newsstands from one to two weeks earlier, however many also believe that the Adventure Comics story was written and drawn first. Artist Creig Flessel (who drew many of the early Sandman adventures) has often been credited as co-creator on the basis of having drawn the first Sandman cover for Adventure Comics #40, but no evidence in support of this theory has ever surfaced. Like most golden age superheroes, the Sandman fell into obscurity in the 1940s and eventually other DC Comics characters took his name.
The Sandman continued to star in Adventure Comics through issue #102 (March 1945). As one of the comics mediums seminal "mystery men" (as they were referred to at the time) the Sandman straddled the pulp magazine detective tradition and the emerging superhero tradition because of his dual identity and his fanciful, masked attire and weapon — an exotic "gas gun" that could either compel villains to tell the truth or put them to sleep. Unlike most superheroes, he frequently found himself the victim of gunshot wounds, and he would continue fighting in spite of serious limitations that these injuries caused.
In his early career, Wesley Dodds was frequently aided by his girlfriend, Dian Belmont, who was aware of his dual identity. Unlike other superhero love interests, Belmont was often portrayed as an equal partner of the Sandman, rather than a damsel in distress. Later stories would reveal that the two remained together for the duration of their lives, though they never married. The Sandman was also one of the original, founding members of the Justice Society of America when that team was first introduced in All Star Comics #3, published by All-American Comics (one of the companies that would merge to form DC).
Due to an encounter with the entity known as Dream, Wesley Dodds possessed the power of prophetic dreaming. His dreams often came to him as cryptic, ambiguous visions, but the Sandman’s keen intellect enabled him to properly interpret them.
Posted by Chuck Wells at 8:16 AM