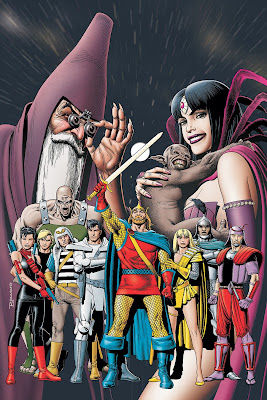 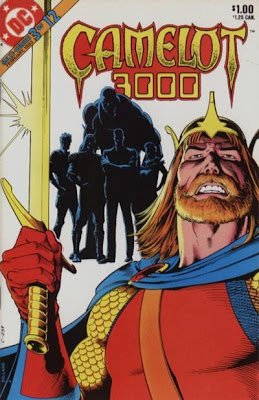 Yesterday's announcement by DC Comics left me somewhat bewildered and bemused, so today let's look back at something out of left field that was just pure comics fun (even if getting all twelve issues was originally sort of like pulling teeth - three years for 12 comics?); so this is where J.M. Straczynski gleaned his muse for his own currently "endless" Marvel project, The Twelve. Coincidence, I think not!
Camelot 3000 was a twelve-issue DC Comics maxi-series written by Mike Barr and penciled by Brian Bolland. It was originally published between 1982 & 1985, as one of the publishers first direct market projects.
The series followed the adventures of King Arthur, the wizard Merlin and the reincarnated Knights of the Round Table, as they reemerged into an overpopulated future world of 3000 A.D. to fight off an alien invasion masterminded by Arthur's old nemesis, Morgan Le Fay. Fulfilling an ancient prophecy that he would return when England needed him most, Arthur was awakened accidentally from his resting place beneath Glastonbury Tor by a young archeology student, Tom Prentice, whom Arthur made his squire and later a knight. The two of them traveled to Stonehenge, where Merlin lay trapped via sorcery, and awakened him to help them recover Arthur's legendary sword, Excalibur.
Arthur, Guinevere and Lancelot were again presented as the traditionally familiar doomed triangle of lovers; however Guinevere was reincarnated as Joan Acton, an American military commander, while Lancelot was reborn as Jules Futrelle, a wealthy French industrialist and philanthropist. Sir Galahad was changed from an idealized version of the Christian knight into a samurai and devout adherent of Bushido. Sir Percival was genetically altered into a monstrous giant, but retained his gentle manner. Sir Kay, cast as the court churl, later revealed to Arthur that his characteristic obnoxious demeanor was in fact an affectation intended to reduce tensions between the various members of Arthur’s revived court, by uniting them in mutual dislike of Kay.
Modred was not the son of Arthur's sister in this version, but the bastard child of Arthur by another woman. After Modred's birth, he had been taken away by a peasant woman to be hidden from Arthur, but she was intercepted by Sirs Kay and Tristan. Arthur then attempted to drown the baby to prevent him from becoming a threat to any legitimate heir; but unbeknownst to Arthur, the baby had survived. In the year 3000, Modred was reincarnated as Jordan Matthew, a corrupt United Nations official in league with Morgan Le Fay, and who later fused the recovered Holy Grail into a powerful suit of armor.
The most marked departure from any of the Arthurian characters was that of the figure of Sir Tristan,who was unexpectedly reincarnated as a woman. This transformation forced him to reexamine his previous conceptions of gender roles and his own sexuality. Although his relationship with Isolde – also reincarnated as a woman – is tested by his new identity, their enduring love for one another eventually triumphed, and the two became lovers by series end.
Camelot 3000 received widespread recognition including a 1985 Jack Kirby Award nomination for Best Finite Series.
Posted by Chuck Wells at 9:12 AM

When this series finally finished~ I prefered it over the Watchmen series at the time. The idea that one could split an atom with the blade of a super-sharp sword still amuses me. What aim~!

I've always hoped that DC Comics would strive to have Barr & Bolland reprise this series, by having the surviving characters encounter some variation of the Green Knight myth or some other aspect of the Arthurian mythos.

I'm with Lysdexicuss: I liked this WAY more than the Watchmen. How much did I love this series and Brian Bolland's art? I have a tattoo on my forearm of the sword Excalibur! . - Mykal