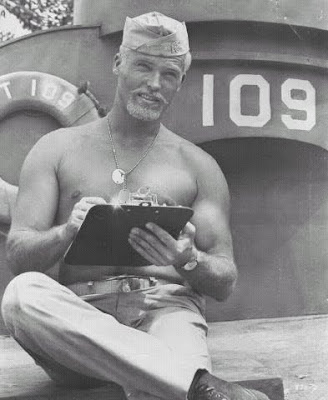 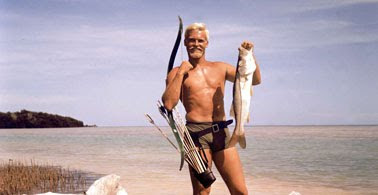 Here's a mystery photo that reminds me of the by now discarded "Silver Age" origin of Oliver Queen aka Green Arrow.
First, here is a reminder of Ollie's origin from the Silver Age years: "When millionaire Oliver Queen fell overboard from a yacht, he was washed up on a deserted island where he was forced to learn how to hunt with a bow and arrow in order to survive. He eventually escaped from the island by overpowering some drug smugglers and handing them over to the authorities. Changed by his experiences, he decided to give something back to society, in as exciting a way as possible - becoming a crime-fighter, using his archery skills for good. With a nickname coined by the press, Green Arrow (and his sidekick "Speedy") made it their mission to protect Star City. He took his cue from Batman and built his own "Arrow Cave," complete with an "Arrow Car" and allegedly a yellow submarine. He and Speedy fought crime with trick arrows that were designed to be non-lethal. Green Arrow eventually joined the Justice League of America and soon fell in love with member Black Canary (even though he was almost twice her age)."
Now, until one of you accurately identifies both the person pictured and the circumstances under which the image was actually taken, I'm gonna have a little "more fun" and suggest that this is a "rare" news photo of millionaire Oliver Queen taken at the time of his rescue (and prior to his beginning a career as a costumed crusader).
Tom Floyd correctly identified the photo as actor Ty Hardin (new photo; top) as "Ensign Leonard Thom" in the 1963 film, PT-109 (based on the Navy experiences of former President John F. Kennedy).
Posted by Chuck Wells at 10:52 AM

Hmmm. Kinda looks like millionaire Richard Branson, who does own a tropical island, and might go fishing with a bow and arrow.

But I like the idea that it is Ollie.

I don't want to ruin anything, but is that Ty Harding and probably on the location shoot for PT 109? Just a guess. I always thought he would have been a perfect looking Green Arrow even when that movie came out.

Tom .. you win the cigar for being correct on both counts! Ty Hardin it is, and the photo looks like it was shot on-set but not as part of the "PT-109" film itself.