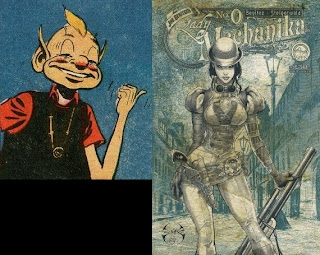 This issue is cover dated October 2010, but it was just passed along to me as a casual read this week (thanks, David) and I realized that this issue closely sums up my opinion of too many modern comics. Joe Benitez's Lady Mechanika #0 is a nice book to look at, he is a talented artist after all, but that would be the only reason to give this series a cursory look.
Comic book artists are often seasoned visual storytellers, but when it comes to crafting a decent backstory or plot, the writing end often suffers. I understand that a "zero" issue is meant to introduce a new character or concept to potential readers and there is the bare bones of a plot present in this book, but with only fourteen story pages; one of which is the inside front cover, reading won't actually take very long with this introductory issue. There is a single page with only four words on it. Four! There is also an entire two page combat spread that has only about a dozen words on it. Here the intention was apparently to make a pretty package, with the least semblance of a plot to drive it, and then have a neat stack of cool-looking art pages for sale to willing fans afterwards. Aspen would have served their fans better by hiring an actual scripter to write this book. Joe was so jazzed about this "exciting" concept that he, or Aspen rather, offered seven different cover variations for this issue. For fourteen story pages. Really! Are those people that stupid? Is it just the fans who bought all those copies of this book? I sure don't know. There are seven additional pages devoted to design work for the lead character and hawking the next issue (again with more cover variations), plus a page with special cookie recipes. Oh joy!
The series premise is built around a steampunk genre setting with the title character being a partially mechanical amnesiac, who begins a new life as a private detective and bounty hunter. She takes on cases that ordinary law enforcement can't or won't, all while searching for clues to her past.
There are lots of fans who flock to drivel like this, and I understand that certain art-styles drive the modern comic book industry. As a publisher, Aspen has a massive back stock of ridiculously similar fluff. All sound and fury, signifying nothing. Don't get me wrong, Lady Mechanika #0 looks good, but this is a serious waste of time, even for a cover price of only $2.50. Save your dollars and avoid this one like the plague!
Posted by Chuck Wells at 2:22 PM