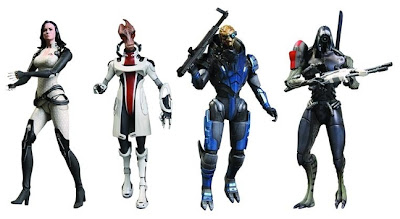 I received a surprise package in the mail yesterday. Last year DC Direct released the first wave of licensed Mass Effect 2 action figures including Commander Shepard, Grunt, Tali and Thane (which I purchased), and almost immediately cancelled their previously solicited second series of figures (which I had on order) based on the popular RPG. DC Direct had its issues, but that is a whole other matter. Now we’re a full year later and Bioware; courtesy of Big Fish Toys has reissued the first wave and finally released the original second set of Mass Effect figures including some of my favorite franchise members like Mordin, Miranda, Garrus and Legion, plus you also get Mass Effect 3 Multiplayer DLC with each purchase. Each figure contains a unique code that can be redeemed for a downloadable content pack for Mass Effect 3 multi-player, slightly randomized during registration which could include powerful new weapons and new characters (or character boosters), weapon modifications, and weapon upgrades to make your multi-player squad stronger. Note, however, that this bonus DLC is only for the Xbox 360 and PC. Individual action figures cost $20, while four-packs cost $75.

ME3's multiplayer is a series of four-player co-op missions. Playing through these missions can affect the outcome of your ME3 single-player campaign. However, the multiplayer and single-player are otherwise completely separate experiences. If toys are your thing or if you like the Mass Effect stuff, give these figures a look. The photo is from last year, and is of the second wave prototypes, so expect the actual product to look better than several of these. My Garrus and Legion figures look much better than this photo image.
Posted by Chuck Wells at 10:26 AM