Starting in September, Hermes Press will release an all-new, six part mini-series featuring the classic Ghost Who Walks, helmed by super-star writer Peter David with artwork by seasoned veteran and Phantom chronicler extraordinaire Sal Velluto. Hermes Press Publisher Daniel Herman notes that, “When we asked King Features to allow us to build on the mythos of The Phantom we were clear that we wanted to expand the canon of one of comics’ greatest legends by embracing the character and his history, and by building on it. We want to create new stories that Lee Falk would be proud of!” 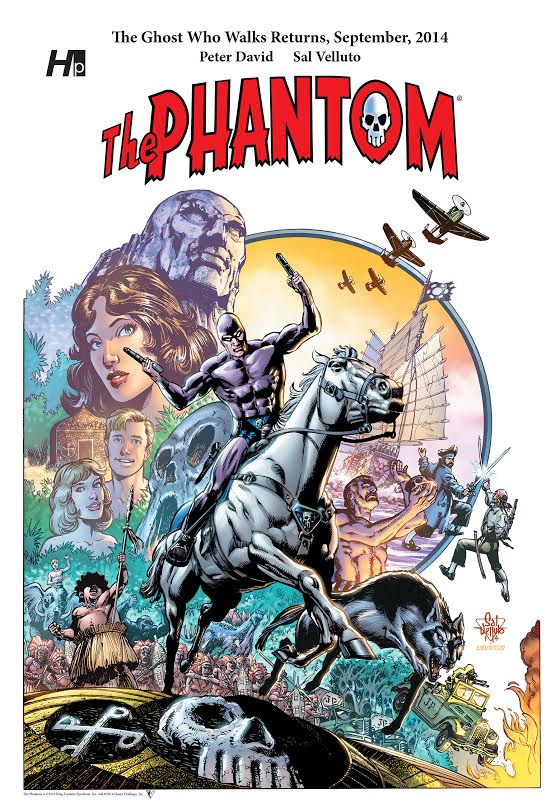 Herman added that the selection of Peter David was the obvious choice as he is a known fan of the classic strip and understands its mythos. David has written extensively for comic books for over twenty-five years, as well as his own novels, television and film credits. He is currently hard at work creating a story arc that fans won't want to miss. David pointed out that, “I've been a huge Phantom fan for years, and even had the chance to work on him for DC many years ago. I'm thrilled that Daniel approached me about this series and I'm taking the opportunity to produce a story I've literally been thinking about for a couple of decades. I'm very much looking forward to seeing Sal's pencils and putting the book out there for the fans.” Velluto is also hard at work crafting the art for issue #1. “This will be a classic story that will attract both fans and those who have yet to enjoy the adventures of The Phantom,” he commented.


Issue #1 will be solicited in the August Previews and will hit comic shops boasting two covers by Velluto as well as variants by seasoned Phantom artists Alex Saviuk and Graham Nolan. A special poster created by Velluto will also be released at the upcoming San Diego Comic-Con to mark the new series. “For the last five years Hermes Press has published reprints of Lee Falk’s classic comic strip together with our comprehensive reprint series of the Gold Key, King, and Charlton Comics adventures of The Phantom—now we’ll have the opportunity to add to that material with original comic books,” Herman said, adding, “We couldn’t be more excited and we think fans will be too.”

The Catacombs really thanks Sabrina at Hermes Press for allowing us to share this news with you> Check out The Phantom this September; I know that I will be grabbing a copy!
Posted by Chuck Wells at 10:49 AM