With issue #49 of DC Comics Justice League currently sitting on the stands, it appears that artist Jason Fabok's stellar run [#36-present] on this blockbuster series is all but done with the conclusion of this storyline in next months issue #50. That is a sad, sad thing to ponder! 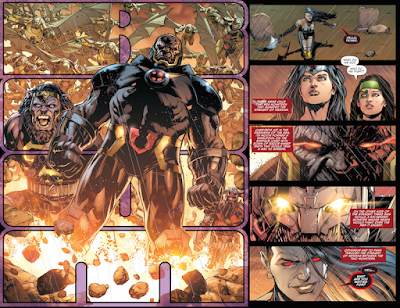 If there was any New 52 title worthy of that seemingly unnecessary line-wide reboot, it has been Justice League. Trinity War, The Amazo Virus, Forever Evil and The Darkseid War have kept the action churning at a high pace and there has been one exceptional artist after another shepherding this topnotch book along, including Jim Lee, Ivan Reis, Dough Mahnke, and Gary Frank, but it has been Canadian illustrator Fabok that really had me the most excited for a DC book since Peter Tomasi, Fernando Pasarin & Scott Hanna ended their tenure on Green Lantern Corps some years back. Fabok will be missed, and really how do you replace an artist this good; well you can't. I am heartened somewhat at the news that Fernando Pasarin will be splitting duties on the upcoming Rebirth launch of Justice League along with artist Tony Daniel (about whom I am less than thrilled).

Still, if you've not seen the current Justice League run, be advised that these issues are climbing in price; certainly a telling indication of how excellent they are and how well they've been received. I'm posting a single image to whet your appetite for more. Go get them now while they are still affordably priced!
Posted by Chuck Wells at 1:34 PM

Fabok's work has indeed been stellar. It's hard to believe this was his first major work. DC had him doing gruntwork before it.