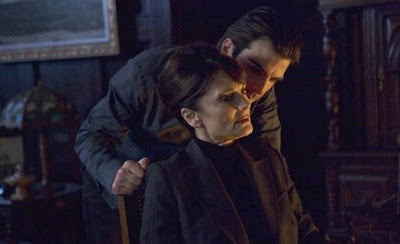 The solicitation for this episode (12/15/2008): "Nathan and Peter face off after the battle with their father, and Nathan makes a move with far reaching consequences. Sylar takes Claire, Noah, Meredith and Angela hostage at Primatech, forcing them to make some desperate choices and the fates of several heroes may hang in the balance. Ando, Matt, and Daphne continue their quest to save Hiro, but Mohinder may hold the key to rescuing him in the past."
The fallout from this final episode of the "Villains" story arc has decided the fates of several members of the extended cast and it appears that a few of the bad guys may have fallen. Certainly fear-monger Knox is gone for good, and that poor Marine sergeant from last week didn't get to hang around after all, but others whose demise MAY have occurred include Flint, Meredith, Sylar and Arthur Petrelli. I say "may", because viewers have seen the see-saw effect from this show too many times before. Arthur didn't revive this week, but considering how resilient he proved to be, who knows, and as for Sylar, well, didn't they too conveniently float the possibility that Angela knew who his real parents actually were just as she was about to negotiate a truce with Gabriel/Sylar, only to have the lovely Claire really "stick it" in the exact spot of Sylar's brain where he - supposedly - can't recover from and .... well, you get the picture.
I was less than thrilled to see Mohinder walk away from his own heinous actions, now in the company of Tracy Strauss, who Nathan told to take a hike after she put the permanent kibosh on Knox. Dr. Suresh should have bitten the big one too, guys. There was no reasonable explanation for why Nathan wanted Tracy to leave either. Now that he is seemingly committed to facilitating Arthur's plan anyway, isn't that what Tracy was trying to help him pull off?
So, Ando is now counted among the super-powered crowd? We'll have to wait and see if his abilities can somehow revive Hiro's own Arthur Petrelli-stolen talents in the next story arc which is to be called "Fugitives", but it was very convenient for Peter to use the formula to get his powers back, and to have the fluid from a different vat cure Mohinder. Also, based on the teaser at the end, America has apparently elected its first Klingon to the White House.
Posted by Chuck Wells at 7:13 AM

President Worf! I can't imagine what the debate would have been like. :-)