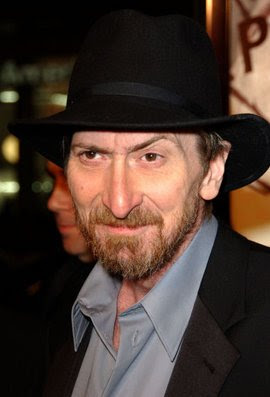 I just finished reading a hilarious & revealing early review of "The Spirit" which will open in movie theaters around Christmas. I had already committed myself to not seeing this flick, as every trailer that I've seen pretty much revealed that it wasn't Will Eisner's classic character brought to life on the big screen.
Read this review and be forewarned http://www.aintitcool.com/node/39450
You will laugh (or cry) if you are a fan of either The Spirit or Will Eisner! And ... you will probably want to join me in lynching Frank Miller (he is the butt monkey whose picture is floating over there on the right hand side of this post).
Up yours, Miller! The only point made by the reviewer in his dissection of your stupid-looking film with which I disagree, is that YOU are at fault for making this turkey (and for being you). Based on every available promo for this film, you either hated the original premise, concept and characters that were a part of Eisner's classic Spirit strip OR you truly think that comic book fans are among the most incredibly stupid people on the planet.
Here's a clue for ya'. You've forgotten that you are a major fanboy yourself, and as you continue to spend the cash that you receive for your earlier comics work, take heart in the fact that you successfully scammed a major studio out of a bucketful of money to churn out this piece of pablum. I wonder if Robert Osborne can edit you out of your recent co-hosting gig on Turner Classic Movies?
Posted by Chuck Wells at 9:52 AM

Yow Chuck! That linked review was tedious. I have to say while I'm not pleased with what I've seen of the Spirit so far I more agree with the comments ABOUT that guys "review" that follow it.

The 1980's Spirit movie actually wasn't that bad by the way (given its time and budget considerations) I say we all just watch it instead.

I missed that earlier Spirit tv movie and have no opinion on it.

I also realize that I hurled some harsh remarks towards Miller, but he is a bit like flypaper considering how far off the mark he managed to stray with Eisner's property.

After each snippet of Spirit footage that I saw, I could .... not .... believe that someone thought that Frank could pull this off and Rodriguez ought to find Miller and beat the living shit out of him for suggesting that he(Miller) co-directed Sin City. I don't think so, and I really hope that this ends Miller's tenure as a director in Hollywood.

Stick to storyboarding, Frank. At least you've got a background in that discipline .... [thanks to comics].

Chuck, hurling some harsh remarks in the general direction of Frank Miller is ok. because he deserves it. I haven't seen the Spirit, and I have no intention of seeing it, but I lay the blame for it squarely at Miller's feet. the man is an arse.

yeah, Frank, you did Dark Knight Returns and Daredevil. well done. now, move on, you twat. I did. and I feel better for it. I really do.

I can't believe all the complaints that you guys have about a movie THAT YOU HAVEN'T SEEN!

Well, at least I'm not alone in my dislike for this movie. I didn't need the review to tell the film was going to be bad. The commercials did that.

That said, Scarlett Johansson looks hot. It doesn't change my opinion in anyway, and I'm not going to spend money to see it, but I just wanted to say that for the record.

Phil, you should be able to tell from our comments that we ALL appreciate Will Eisner's "The Spirit", but Miller hasn't even tried to do justice to that classic strip - very obvious in the trailers - and sadly there is always someone handy to parrot a similar remark to the one you posted.

Too bad, but you are welcome to waste your money.

Robert, I agree with you about Scarlett, but for me it's all about Eva & Paz.

'Tis as I feared. I'm glad that I won't be the only boycotter (but I would still boycott even if I were alone).

Meanwhile, I quite agree with Mr Skiver on the '80s movie. It was a good faith effort within significant constraints.

Hell, it's what almost three years later and I still refuse to see this movie. It's like he forgot to write how to write three dimensional characters.

Bought a used copy of the DVD for cheap at Blockbuster or Hollywood Video. I still cannot finish watching that movie. Really bad.