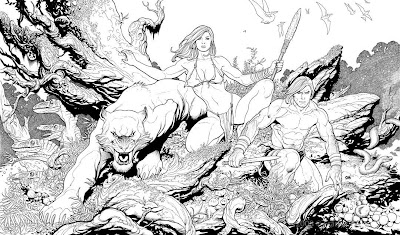 Ka-Zar was created by Stan Lee & Jack Kirby in The X-Men #10 (March 1965), he lives in the dinosaur-populated Savage Land, which was hidden beneath Antarctica by extraterrestrials. Of his four self-titled series, two originally ran during the 1970’s (1970-1971; three issues, mostly reprints) and 1974-1977 (20 issues), but he was also featured in two other 1970's series, Astonishing Tales #1-20 (August 1970 - Oct. 1973) and the magazine-sized, black & white version of Savage Tales #1, 6-11 (May 1971, Sept. 1974 - July 1975).
Ka-Zar has a certain degree of distrust toward civilization and he is generally wary of outside visitors to the Savage Land. He refers to himself as the "Lord of the Savage Land", a phrase others have also adopted, but this is not a formal title.
Ka-Zar is actually Lord Kevin Plunder, born in Castle Plunder, Kentish Town, London, England. He is the eldest son of Lord Robert Plunder, the English nobleman who discovered the Savage Land. After his parents were killed, Plunder was found and raised by the sabertooth tiger Zabu, who possesses near-human intelligence thanks to a mutation caused by radioactive mists. Ka-Zar and Zabu are constant partners. Ka-Zar became an expert hunter, trapper, and fisherman, living off the wild land.
In the Savage Land, some territories are populated by several human or humanoid tribes, and while most of them are on friendly terms with Ka-Zar, some of them do consider him an outlander and an enemy. He acts more like an unofficial general protector, preventing outside commercial exploitation, such as poaching and mining, as well as enforcing peace between the various tribes and serving as goodwill ambassador to friendly visitors.
Ka-Zar has often teamed up with several Marvel heroes including Daredevil, Hulk, Spider-Man, the Avengers and the X-Men. After the Savage Land became known to outsiders, Ka-Zar discovered that the Savage Land was a remaining part of the prehistoric super-continent called Pangaea. He later married adventurer Shanna O'Hara, who has taken the name Shanna the She-Devil.
Kevin Plunder is a very athletic man with a unique style of hand-to-hand combat shaped by years of surviving in the Savage Land. He carries a 12-inch Bowie knife, and occasionally uses a slingshot, bow and arrow, and other primitive weapons.
Posted by Chuck Wells at 8:29 AM

Should change that first line in that Ka-zar was RE-created by Stan Lee and Jack Kirby.

Ka-zar is one of two heroes who predates Marvel Comics #1 but would find a home at the company that would become Marvel (the other being Namor, the Sub-Mariner, half his story in that comic is actually a reprinting).

Ka-zar first appeared in 1936, in a pulp with own name, written by Bob Byrd. There were three issues. He was orphaned David Rand who with his lion pal Zar roamed the jungles. His appearance in the GA comics kept pretty close to his pulp origins, although along the way he gained super-strength.

In the 60's, he was given a new backstory and the lion Zar became the sabretooth Zabu and the African jungles became the more exotic Savage Land.

Cash, I "almost" delved into all of that earlier stuff, because I suspected that someone would bring it up - but then opted to pass on it - since the newer version of Ka-Zar (that Lee & Kirby introduced in 1965) was different enough to dispense with the mention.

I was aware of the David Rand character, and here's a tip of the hat to you for succinctly including the extra pulp history of Ka-Zar.