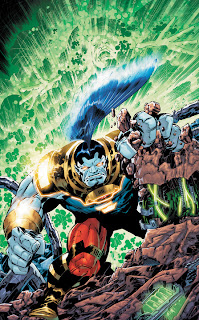 Last week's midnight meat train party for Justice League #1, was a precursor for the relaunch of the DC Comics Universe. Folks they've thrown the baby out with the bathwater, but different drivers for different strokes, or whatever. I'm not gonna grouse about their Nu-Plan, nor hold out hope that these mythical "new" readers will materialize and save the day; so here's a-what I'm a-gonna do.  Each week I'm going to breakdown how I personally view the 52 books as a longtime reader, assorting them three ways. Stuff that I like will be categorized as BEST OF THE BATCH (with a single favorite choice highlighted in *bold). Titles worthy of trying out, but that don't really interest me, will be categorized as "EASTER EGGS" and relaunched books that aren't worth the trouble, are poorly thought out, or that suck, well, these will be unfortunately considered "GOOSE EGGS" (nuff said).
BEST OF THE BATCH (9/7/2011)
*O.M.A.C. #1


See ya' next week, and remember not to hate - To Each His Own! 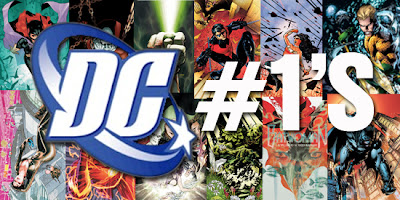 wow. you actually read all of them? I'm impressed. I read Justice League, Action Comics, and Detective Comics ( didn't buy them, just read me mate's ). Justice League was pretty much what I expected from a Jim Lee comic, Detective Comics made no impression on me ( I think it had the Joker in it ), and I don't get the new Superman, at all, although it WAS drawn nicely.

so, yeah. a resounding sigh from me. I might try Swamp Thing.

No,no,no,no,no; I didn't "read" all of them, Joe. My breakdown was of how I personally "viewed" the new 52 books as a potential reader window-shopping off of the stands.

Just like any regular bookseller hopes that their back cover synopsis or front cover review snippet grabs me as a potential reader, even placing the best designed cover art or photo for maximum eye appeal to get my attention; comics publishers have to EARN my purchase.

My BEST OF THE BATCH choices succeeded and I did buy those to try them out. The EASTER EGGS seemed okay after a glance only, but none prompted me to purchase them, and the GOOSE EGGS almost entirely sucked in my estimation. For instance, Superman was prominently featured in Swamp Thing and I don't know why his presence was necessary. His new look is "ridiculous", whether the bluejeans & t-shirt version on display over in Action Comics or the dumb, dumb, dumb armored suit he's sporting in his relaunched title.

Honestly, there's no way I would attempt to read all of these books. I know that plenty of trolls would consider that as being "unfair", but I say don't hate the player, hate the game, and this is how it works when a major publisher throws it out there for dissimenation.

Superman's in Swamp Thing? ok. looks like I won't be trying Swamp Thing, then.

You are quite mistaken about Action Comics 1. As with All-Star Superman Morrison returned Superman to his roots, emphasizing this time the working class hero--hence t-shirt and jeans--protecting the average joe from corporate/money-bag oppressors, as Schuster and Siegel intended, instead of being the corporate spokesman/apologist Superman became.

CoryJay, that you've determined that my personal choices or preferences are "wrong" is quite bemusing.

When I closed out my post with the phrase, "To Each His Own", I mistakenly (there I go being wrong again), assumed that others may hold with a different opinion of many of these new 52 books.

Let me clarify a specific point that will clear up my stance on this version of Superman. Morrison couldn't effectively return Superman to his "roots", even if he had a tuber lodged up his Scottish ass.

I would definitely try reading Omac if it's ever collected in a trade paperback.