As promised last week, here is a "bonus" nominee for my Top 10 Defunct Comic Book Publishers list. This company may have had titles accessible in regular bookstores or in head shops back in the 1970s, but I only got my issues through mail order. It was always cool getting these issues, too.
Star Reach (also spelled Star*Reach) was an influential, science fiction and fantasy comics anthology published from 1974 to 1979 by Mike Friedrich. One of the first mainstream independent comic books, and the first with any significant distribution, Star*Reach bridged the gap between counterculture underground comix and traditional newsstand fare, providing mature genre stories for an adult-oriented audience. Star*Reach was also a forerunner of the modern graphic novel, and of the 1980s' rise of independent comics. 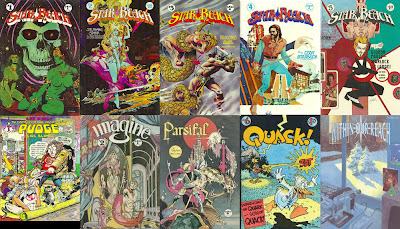 Friedrich's company grew into a small publishing house, called Star*Reach Publications, that published the comic book series Quack, Imagine and Lee Marrs' Pudge, Girl Blimp, along with an assortment of one-shot comics. The company ceased publishing in 1979.
Posted by Chuck Wells at 10:40 AM

"The company ceased publishing in 1979."

It didn't so much "cease publishing" as transform into agents for a number of the creatives it represented (and new clients, as well), helping them place both reprints of the already published StarReach stories and new material with book and magazine publishers including Heavy Metal, Byron Priess, Eclipse Comics, and animation houses at least thru the late 1990s.
I don't know if they're still in business as of 2011.