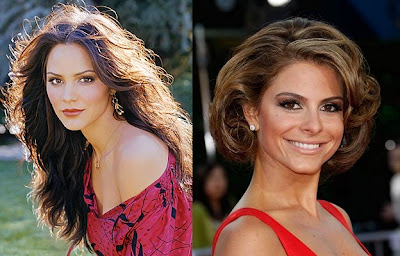 Tomorrow is my 50th birthday, so as an early present for us all; I’m doubling up the fun this week with TWO official “gal” Friday picks. Lovely American Idol season 5 runner-up, Katharine McPhee rolled out her new TV series this week. “Smash” is a musical drama on the NBC network that revolves around a group of characters who come together to put on a Broadway musical based on the life of Marilyn Monroe. But before that can happen, the people who will try to bring it all together must deal with their own personal acts. McPhee stars as Karen Cartwright, alongside veteran performers Anjelica Huston, Debra Messing, Megan Hilty and Jack Davenport. My daughter actually made me watch the premiere, but I’ll admit to liking it for the most part, and Katharine McPhee was quite good in her role. 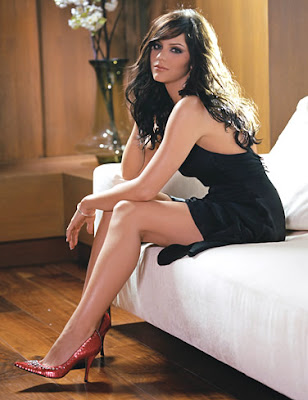 True to her word after losing a bet, Maria Menounos appeared (albeit briefly) wearing a Giants-themed bikini in on Monday during coverage of the newly crowned New York Giants Super Bowl Champions parade. Had the Patriots won, male co-host A.J. Calloway would have had to wear a Patriots cheerleader outfit in Times Square while hosting "Extra Live" from Times Square in the chilly weather. Although she proved herself to be an able trooper, Maria was visibly uncomfortable for at least a few moments during the broadcast, and she certainly deserves props for following through with her “reveal”. Give it up for a gorgeous knockout, because who doesn’t want to see that in a bikini?
Posted by Chuck Wells at 1:55 PM