My original plan was to post at least one golden age comics story this week, but that plan got blown all to hell. Since it's "gal" Friday, I will go ahead and stick with this weeks lovely featurette; and make amends by posting an extra jungle girl adventure [or two] next week. 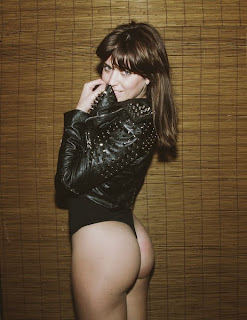 Seasick Mama is a singer/songwriter based out of . After a year in the making, her debut EP “Dead Like Money” has been released. Seasick Mama says that the work truly expresses her desire to not be bound by a single idea. Each song stands on its own as a snapshot of our past, present, and future. Before releasing this first record, Seasick Mama developed a large following by playing major festivals including South by Southwest, Sweetlife, and CMJ, as well as touring with blues-pop sensation ZZ WARD. Onstage, Seasick Mama has emerged as an artist that pushes expression and freedom to new levels. Whether climbing to the rafters or tearing off her clothes (and I'm seriously all for that, at least in her case), she will not be bound by standard conventions. She has also previously curated gallery events, designed apparel and continues to develop new ways to bring creative types closer and closer together. Unfortunately that probably leaves me out of the mix.

Trust me on this however, do a simple Google search and you will be able to find some generous images of her fantastic nude frame cavorting through various photo shoots. Her actual name is Marial Maher, and despite billing herself as "Seasick Mama", apparently that may also apply to the entire band which includes her as lead vocalist; heck if I know! I do know that she is one smoking hot chick, with an interesting and eclectic personality; plus a nice sultry vocal style that is definitely worth a listen.

She seems to be following in the footsteps of Cristina Martinez of Boss Hog...

I have to agree with you on that one!

Yes, yes it is; smoochable even!!