The adventure that started it all is back! Howard Chaykin’s ground-breaking tale of the new Buck Rogers comes to comic book stores in August!  Before Star Trek and Star Wars, Buck Rogers captivated audiences around the world and made science fiction a national obsession.  Now, over eighty years after the creation of the newspaper strip that became a household word, Chaykin has returned the character and his universe back to basics:  Buck Rogers, former World War I ace is accidentally suspended in time only to awaken to a new and different earth, 500 years in the future, fragmented by war and ruled by an omnipotent force— the Chinese.  Now, Buck along with Colonel Wilma Deering, begin a new fight, to free the !  You’re in for the ride of your life with this retelling of a classic tale! Chaykin’s revival of this classic feature sets the stage for new adventures — so stay tuned! Be sure to check out the premiere of this fantastic revival of a beloved pop culture icon, the first sci-fi hero!

If you are in attendance at this weeks San Diego Comic-Con, advance copies of both the regular edition [pictured] and a variant cover edition will be available at the Hermes Press booth; the book will be available in August 2013. 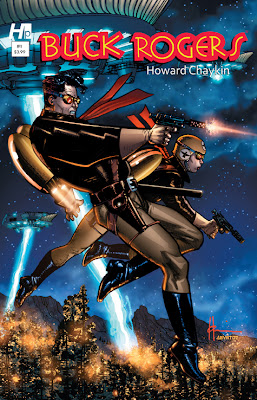