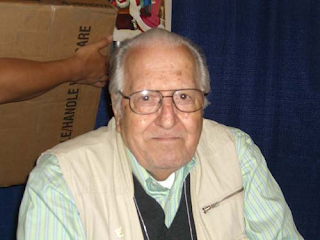 Golden Age comic book artist, Eisner Hall of Famer and WWII veteran (earning two Purple Hearts for wounds suffered as a tank driver in the armored cavalry), Nicholas Viscardi has passed away at the age of ninety-three. "Nick Cardy" produced a prodigious amount of cover art for DC Comics in the 1960's and 1970s, so much so that he established himself as a cornerstone of the Distinguished Competition during his tenure at DC. Beyond that he remained as penciller on Aquaman for almost forty issues and is equally recognized for his work on Teen Titans, Bat Lash, House of Mystery, House of Secrets, Justice League of America, Tales of the Unexpected, and World's Finest. In 1950, Cardy began drawing the black-and-white daily Tarzan comic strip for writer-artist Burne Hogarth. From 1952 to 1953, Cardy assisted Warren Tufts on Tufts' comic strip Casey Ruggles. He left comics in the mid-1970s for the more lucrative field of commercial art. He painted many movie one-sheet posters including Apocalypse Now. The Catacombs extends its sincerest condolences to his family, friends and fans. I count myself lucky for having gotten to see Nick many times at conventions over the years, and will continue to treasure my original Bat Lash sketch.