Elsa Bloodstone first appeared in Marvel's 2001 Bloodstone mini-series written by Dan Abnett and Andy Lanning. She is the daughter of the previously established Marvel Universe character Ulysses Bloodstone (first appearance in Marvel Presents #1; Oct.1975). She currently lives in Bloodstone Manor with her mother and her ally the Frankenstein Monster. She has also befriended Charles Barnabus, a pureblood vampire lawyer and the executor of the Bloodstone estate.


Elsa has been utilized in various Marvel publishing efforts such as Nextwave, the Initiative, The Fearless Defenders and Marvel Now; but she has seemingly returned to her monster-hunting adventures vowing solemnly to never have children on her own, since she feels the responsibility of being a Bloodstone too heavy to be forced upon another living being.
Elsa has exhibited superhuman strength, speed, durability and endurance and a regenerative ability. She appears to possess all of the abilities that her father previously had. In addition she has demonstrated immunity to vampire bites (her blood will actually kill a vampire if consumed and the original Bloodgem fragment itself is anathema to vampires).


In the Bloodstone mini-series, Elsa claimed that she had inherited at least some of this power genetically, but it has been shown that her powers of strength and invulnerability were bestowed upon her by the Bloodgem fragment she wears on a choker. She has also been portrayed as an expert marksman. Among a number of artifacts gathered by her father she has used a lamp which contains a genie whom Ulysses had enslaved years ago. This device serves as an early warning system, lighting up during times of supernatural crisis, and transporting her to said event. 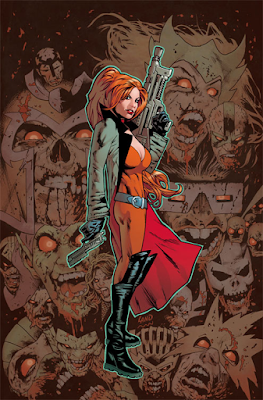