This here is a run-out-the-clock situation.

Dinosaurs are long gone and collectively we understand that their exit was prompted by the (K–T) extinction, a mass extinction of some three-quarters of plant and animal species on Earth—including all non-avian dinosaurs—that occurred over a geologically short period of time approximately 66 million years ago.

I've come to the conclusion that a portion of fandom, my own demographic, has been naturally going the same route within the comic book industry since the early 1990's. I have had comics around throughout my entire life from before I could even read in fact. Now in my mid-50's I increasingly feel either antipathy or indifference towards the wares of DC Comics and Marvel Comics. Each of these "big two" publishing powerhouses has made every effort imaginable to maintain what we all know to be a shrinking readership, but you would never know it looking at what is sitting upon the shelves in most comics specialty shops. It is a mind-numbing experience pondering what to purchase out of the hundreds of issues comprising the last several months worth of every single series, plus the often dozen or so related titles within each "family" grouping and then to also have to determine how a half dozen active "versions" of each major character are indistinguishable in their own right? I can recall when the monthly letters page chatter used to jockey around the Earth 1 or 2 JLA/JSA crossovers; and that was only a handful of characters. Back in the mid 1980s DC decided that enough was enough, and we got Crisis on Infinite Earths. Twelve isues, a linewide crossover and then a major reboot that settled things once and for all. At least until the sales figures came in, and well you get the picture. Crisis has continued annually ever since. Oh sure, they call each seasons marketing "event" by a different name, but its really all the same conceit.

Diversity too seems to have unfortunately become little more than the kitschy glamor vibe of the moment, with one established character identity after another perpetually getting remade as an ethnic variation or a gender swap, or to a same-sex gay option supposedly because of audience demand? I don't think so. Each company already had plenty of non-caucasian characters and some homosexual heroes or supporting characters, and some were featured regularly. Moving those to the forefront and increasing their prominence in the wider fictional universe has occurred, but the replacments just keep right on coming unabated. Another ebb tide is the routinely manifested white, blonde female superhero who soon finds her love interest in this politically correct climate to be the nearest black male superhero. Time and again we've seen this and while this reflects reality, it has been done to death largely by caucasian creators who must believe that they alone are introducing this idea for the very first time? We seem to have entirely skipped past any healthy presentations of black male/black female relationships, much less actually doing the hard part and creating a brand spanking new intellectual property to stand upon its own merits. We've gone straight to the default polarizing choice over and again, and face it Tiger; that is exactly what sells headlines once the "haters" begin spouting off at the next introduction or romance along these lines. It would be foolish to believe that the publishers don't expect and/or prefer the vitriolic backlash of these gimmicks. Alas, even my head canon fanboy choice can no longer stand the bombardment. Cacaphony rules the day. I'm baling out while I can retain some degree of appreciation for nostalgia if nothing else. 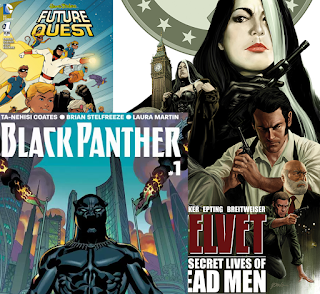 I have tried my best to get on board, to accept and tolerate, but the endlessness of these things has worn me completely out. I do however want to end on a high note praising current books that I am VERY much still enjoying and which all take me to my inner happy place as a reader: Velvet (Image Comics) by Ed Brubaker, Steve Epting, Elizabeth Breitweiser; Black Panther (Marvel Comics) by Ta-Nehisi Coates, Brian Stelfreeze, Laura Martin; Future Quest (DC Comics) by Jeff Parker and Evan "Doc" Shaner and others. Creators whose work also thrills me include Fernando Pasarin, Jason Fabok, Jim Cheung, the Hernandez Brothers, Dan Clowes, Peter Bagge and I'm looking forward to Adam Hughes on Betty & Veronica and the Josie and the Pussycats relaunch later this years. Other than my own shit ton of back issues, this is gonna be about it for me.
Posted by Chuck Wells at 10:45 AM

I can't read comics any more. No humor, stories that lack any logic or insight and too much thoughtless violence. I stopped buying 10 years ago. Ironically, the last thing I bought was a Darwyn Cooke comic.

I have been reading your blog for a while now. Never commented. What initially caught my interest was all the great golden age jungle stories you listed. I started buying the PS Artbooks with all the reprint stuff and it was great to see a blog showing off these great old titles.

I agree with you ENTIRELY about modern comics. I am 55 years old. White, male, old-school. I can remember my grandma buying me Superman comics as far back as 1968.

My story mirrors yours. Loved the 1970's Bronze Age. Started drifting away from comics when I became aware of the opposite sex! When DC had the initial Crisis Event, it caught my attention. (1985. Actual stores that catered to comics was a new thing!) I held on for through the rest of the 1980's. Liked McFarlane on Spidey, etc.

By the early 1990's, I was seriously tired of the "Big Two." Image came on the scene and I enjoyed it a lot. I felt like a kid again. Drifted away from Image by 2000. Jumped back on board the "Big Two" to go back to my roots.

I hung in there for a while. I thought (hoped?) that when DC did the New 52 reboot it was going t be like starting fresh again (like 1968!).

I became very disappointed very soon. The pandering to...what audience... I don't know. All the switching around of such great iconic characters. You know the rest...

I am done as well! There are decades worth of fantastic books, character, etc., going from the 1930's through the 1970's. After that...there were moments that somewhat captured the magic.

But those days are now over. WE are no longer anywhere near the so-called target audiences.

Leaves a lot of time to read all the great books. I love your site and your posts. I'll keep checking your blog every day - even for the mountain of old posts!

Best of luck to you and happy reading!

(I chose "anonymous" because I don't have any of the accounts listed below!)

As I'm about your age, I pretty much agree with your comments but I'd reached that conclusion a few years back. We are not the audience for the Big Two comics and that's okay. I don't mind because there are lots of other stories to enjoy, whether comics or not. Frankly, I'm tired of the whole superhero genre with it's pointless gimmicks as well as Star Wars (still like the first one), Star Trek, Harry Potter and most, if not all, of what passes for popular culture these days. I have zero intention of ever seeing Suicide Squad or any other superhero movies. Indeed, I've not seen most Marvel or DC movies and don't feel like I've missed a thing. And that's okay because I don't have a need to see, nor desire to discuss those movies.

This does not mean that I dislike comic books. I love the medium but for me it's always been about artists rather than characters. But I'm now enjoying work that isn't found on comic book store shelves as well old favorites like Usagi Yojimbo, Sergio Aragones, whatever I can find of Dan Spiegle's work, any reprints of work by Milton Caniff and other cartoonists like Tom Sutton and Rand Holmes. There are also artists like Jaime Chase whose First World was fun to read. I'm discovering the work of cartoonists who's work is, so far, only available on the web or extremely limited print runs. There is a lot of rubbish that is horribly amateurish, but there are also works by artists inspired by none of the usual suspects, who draw inspiration from children's book illustrators, turn of the century artists, et al. That's not to say it's all great. Some of the graphic novels aimed at young readers are pretty lousy, too hip, etc. But there is still some okay stuff out there.

So, I don't miss what passes for most popular comics these days. I'm only saddend that I didn't recognize it years ago. I will always have the stories I enjoyed in the past but as far as missing anything new from the big two, I'm not concerned. The big two will definitely survive without me and based on much of the work that is being put out I'll definitely survive without them.

Isn't there a quote from Godfather, "I'm out, but they always want to pull me back in"? (Something to that effect.)

I'm 46, and have been reading comics since around 1978, collecting since 1980 or so, and sometimes leaving the books behind for real life issues, yet always coming back. I do love comics, my mother and uncle both helped to fan my interest with Batman w/Neal Adams' art. But after reading your post, I feel sometimes that I buy out of habit, not for the fun the books once held, now there's too much pandering to different PC groups with characters, or 'events' that occur every 4-6 months for 6 issues plus 5-6 tie ins that promise to be 'character'or 'earth' changing events, to be just another excuse to renumber a bunch of titles back to #1, which doesn't mean a thing anymore, and hasn't for a long time.

I want the fun back in these books, waiting a month for the new book...now DC gives fans 2 books a month! Price changes, 22 pages of story/art for 2.99 - 4.99, sometimes more depending! (Looking at you Dark Knight III!)

I'm definitely thinning my list of titles, but my inner child doesn't want to give them all up...yet.

I'm a little younger, but have the same basic criticisms of the industry. A few years back I decided to start intentionally looking for good indie webcomics. As of now, Miss Melee is my favorite. If anybody has found other superhero webcomics they enjoy, I'd appreciate hearing about them.