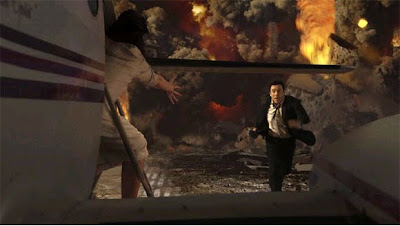 Oh look, a final sci-fi week bonus: I saw the new Roland Emmerich film 2012 last night, entering with a sense of trepidation due to my having first read a couple of disparaging reviews over at Ain't It Cool News, before purchasing a ticket. Harry and some of his regulars really ought to remember that they are geeks and nerds and stop getting so "highbrow" over big budget popcorn flicks.
2012 delivered for me, and here's a nod to Capone at AICN, the lone guy over there who doesn't have his head lodged up his crack over this movie. Talk about being way off base! The cadre of AICN critics who dissed 2012 - other than unilaterally favorable praise over the films awesome special effects from each of them - felt like there were too many extraneous characters present and that this brought down the narrative flow of the film, and in fact detracted from the simple plot line, of a divorced family man who upon learning of the unfolding worldwide catastrophe, literally goes through hell in order to save his family against increasingly impossible odds. [The image above is taken from my favorite sequence in the movie, following the destruction of Yellowstone, with John Cusack dashing for safety as Amanda Peet reaches out to him.]
With respect to the hoity-toity nerds who have apparently watched way too many disposable genre flicks, I respectfully disagree. I thought that 2012 was a thoroughly entertaining, edge of your seat experience. The effects WERE incredible and despite having to seriously suspend my disbelief as lead actor John Cusack escaped one apocalyptic deathtrap after another, I enjoyed director Emmerich's latest ride quite a bit. Early shows at the Hollywood 20 were sold out, and a chunk of the later viewings also quickly sold out just as we were arriving, so I didn't leave the theater until almost 2:00 am.
As I said above, this film IS a big budget popcorn movie. This echoes Capone's own AICN statements to a certain extent, but audiences are well-versed in these types of movies and keep coming back for more. 2012 at least touches on the ideas raised by prophetic mythologies ranging from the Mayan calendar, to the Hopi Indians oral tradition, to the Holy Bible itself, but this movie doesn't dwell on any of them; this tale is all about showing how that might look in actuality and it is here where 2012 will likely win big with audiences.
I also felt like the film stepped up in showing how baser aspects of human nature would rise to the occasion, even as the story elevated nobler aspects of our human spirit. Racism too was touched upon, and when your story is about the ending of the world and the entirety of human history being washed away, that ain't too bad. In addition to Cusack and Peet, the excellent cast includes Chiwetel Ejiofor, Oliver Platt, Danny Glover, Thandie Newton and Woody Harrelson.
Give this one a try folks. After all, we're all probably going to live to see if they got this one right, but remember to keep in mind how far off base the "experts" were on the whole Y2K thing a decade ago.
Posted by Chuck Wells at 4:36 PM

Chuck: This one sounds great - thanks for the level headed review. So many now strive so hard to sound like a real film critic, and they all use that "Highbrow" language, yapping about narrative flow, blah, blah. There's a million billion of them out there now, all talking critic speak.

I'm with you - it's a mega-buck popcorn chewer, people! Meant for fun and ticket sales! This moment's thrill! Save the critic yap for the next Bergman festival, if you can stay awake. -- Mykal

Thanks for such a well written review. I'll probably wait until I can see this on my HDTV so I can adjust the sound; I have a lower tolerance for high decibel movie destruction than younger people, but I appreciate you giving us your opinion. It's actually more cogent than the in-print reviews I've read.

As an aside, I'm always truly amazed by people believing in such bullsh*t as Mayans predicting the end of the world. (Did the Mayans also predict their own demise?) Just add that to a whole long list of things people believe that have me shaking my head in bewilderment. Movies are good at visualizing those sorts of things, though, and can replace reality in some folks' heads, if you know what I mean.