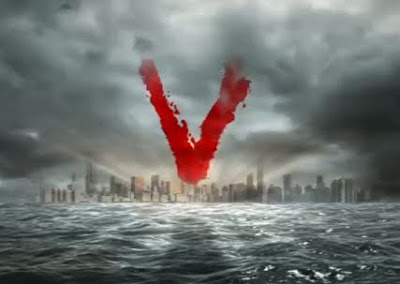 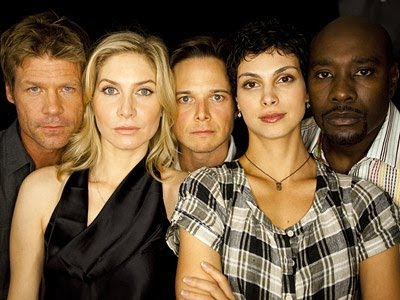 Last night the ABC network began airing its troubled reimagining of the classic 1983 television mini-series "V", with a mere four episode run during the crucial November sweeps period. Reports that the planned 13 episode initial order had been dramatically scaled back may have fueled the mindset that this effort was doomed from the outset. Paired against hit shows "NCIS" and "The Biggest Loser", "V" already had its work cut out for it, even before original showrunner Scott Peters was replaced by Scott Rosenbaum ("Chuck").

Based on the original alien invasion drama, and with current cast members including performers from several other popular sci-fi genre series; Elizabeth Mitchell (Lost), Morena Baccarin (Firefly/Serenity), Joel Gretsch (The 4400), Alan Tudyk (Firefly/Serenity, I Robot), Laura Vandervoort (Supergirl on Smallville), plus Scott Wolf & Morris Chestnut in key roles, "V" manages to hit many of the same beats as the first version, albeit with better visual effects.
ABC ceased production on "V" after its fourth episode, however if post-pilot ratings are not disastrous, the network intends to put it back into production and air new episodes beginning in March 2010.
I enjoyed the premiere and thought that Mitchell and Tudyk had great chemistry together as fellow FBI agents. Baccarin was a nice replacement for Jane Badler in the role of the enigmatic, yet totally hot Visitor commander, and Gretsch's confused parish-priest coming to grips with the motherships arrival and how that event has impacted his faith was subtly well-played, while nicely setting up things to come. Some other cast members were left a little back-burnered by the opening script and I have to say that the originals premise of a teen girls sexual infatuation with one of the aliens is transferred to a young male this time around.
In my opinion, "V" presented enough pleasing entertainment for me to hope that it succeeds in rounding up an audience, but in the very tough world of the Nielsen ratings - we will just have to wait and see.
Posted by Chuck Wells at 8:03 AM

I'll give it a few more chances but overall I wasn't too impressed with the premiere. I thought the first views of the spacecrafts coming down were cool and the big figth scene at the end was very well staged, but everything else was just extremely ho hum and void of any real fun or thrills... especially the characterization with the same old cliched FBI agents, an annoying news anchor, whiney priest, bratty kid and his chubby troublemakin' sidekick... zzzz. Here's hoping it picks up the pace before I delete it from my tivo.