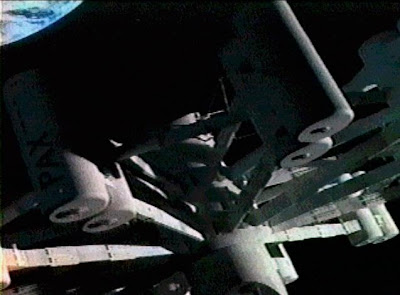 After failing to go to series twice before, a third and final attempt was mounted in 1975 to craft a new sci-fi television franchise from Gene Roddenberry's leftovers and this time out even he wasn't involved. In the near future, a trio of scientists onboard an orbiting space station are conducting experiments in suspended animation, when PAX discovers that Earth is about to be struck by a large swarm of meteors. In a desperate effort to survive the imminent holocaust, the PAX space station is placed into an elliptical orbit around the sun which will return the station to its planetary orbit in 180 years. Meanwhile, several hundred PAX members on Earth seek refuge in underground suspended animation chambers located in the southwestern United States. Planet Earth is devastated by the meteor storm, and forever changed. This is all detailed in a convenient introductory monologue, and the action really only starts after the characters are awakened from hibernation and make their return to an apocalyptic Earth.

Strange New World once again stars John Saxon, in a new role, as Capt. Anthony Vico, with Kathleen Miller as Dr. Allison Crowley and Keene Curtis as Dr. William Scott. Broken into two segments in order to show what the series would eventually look like, Strange New World begins with the team split up by warring tribes of primitive humans on an old game preserve where one group is governed by the descendants of a park ranger, who rules according to the "Code of the United States Fish and Wildlife Service." Capt. Vico and his friends help the two groups learn to understand that they need to coexist in order to survive. In the second half of the aborted pilot, the trio is taken captive by a culture who has discovered the secret of immortality by producing clones for use as spare body parts. However, the "originals" have begun growing weaker, and becoming less able to fight off disease with each succeeding generation of clones. The PAX Team was captured for the purpose of using their blood to revitalize the DNA of the citizens of Eterna. Too bad that the Pax team prefers to stay alive and in the process of escaping, the cloning equipment is destroyed and the population of Eterna dies.

This telefilm has several recognizable 1970's-era guest stars including James Olsen as Surgeon, Martine Beswick as Tana, Reb Brown as Sprang, Catherine Bach as Lara, Cynthia Wood (1974 Playboy Playmate of the Year) as Araba, Ford Rainey as Sirus, Gerrit Graham as Daniel, Richard Farnsworth as Elder and Bill McKinney as Badger.
The film is fairly action-packed and interesting in execution, but in weird little ways it appears to be nothing more than a simple remake of Genesis II. Saxon is his usual manly self, and it's neat to see Daisy Duke (Bach) and a few of the other guest actors who are featured. I tried to find more information online about Kathleen Miller. I was familiar enough with Saxon and Keene Curtis, but after a handful of roles in film and on television, she dropped off of the map. I didn't even find so much as a decent photo of her, and that's unfortunate since she was really cute & sexy in a 70's sort of way. [Thanks again to Jim Shelley for providing this film on AVI disk.]
Posted by Chuck Wells at 1:43 PM

Where can I find this movie?