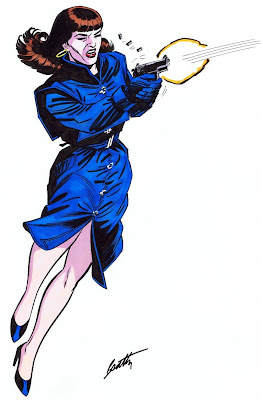 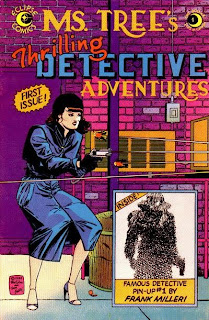 Michael Tree was a private detective who took over her husband's investigation business after he was murdered, and in her first case, she captured the murderer and discovered his link to the Muerta organized crime family. Ms. Tree's dead husband was also named Michael, the joke being that after the marriage they each had the same name. Series creator/writer Max Allan Collins makes no secret of the fact that Ms. Tree was inspired by Velda, Mike Hammer's secretary, a stacked, gun carrying, six-foot tall brunette and Mike's lover, who was almost as tough as he was.
In addition to isolated cases, throughout the series, Ms. Tree's vendetta against the Muerta family was a major plot thread. Her methods often included deadly violence which she used with little hesitation. In contrast to typical genre conventions, she often faced serious consequences for these violent actions including arrest, imprisonment, commitment to a mental hospital, and involuntary medication.
In another genre divergence, the male Michael Tree's son, Mike (of course), inadvertently fell in love with the daughter of the Muerta Family matron. The female Michael disapproved of this arrangement but respected her stepson's decision. To her shock, when their relationship grew enough to make marriage probable, the Muerta family decided that Mike's stepmother was now family and initiated a reconciliation with her while going legit.
Michael was later impregnated by an old flame who was manipulating her to kill his wife. She decided to keep the baby, creating a unique series of adventures with her fighting off criminals even as she dealt with a full term pregnancy, while the mob family she hated moved to protect her in their own unique manner.
The Ms. Tree series frequently dealt with controversial political and sexual issues such as homophobia, abortion and bombing of abortion clinics, devil worship, child pornography, date rape and incest. One of the series' conceits, often alluded to in the narrative but never acknowledged explicitly in the comic books, was that Ms. Tree was the daughter of Dragnet protagonist Joe Friday. In Collins 2007 prose novel, 'Deadly Beloved' (the character's first appearance in 14 years), fans finally saw Michael Tree, pre-marriage, referred to as "Miss Friday".
Posted by Chuck Wells at 10:29 AM

One of my favorite '80's comic series (although American Flagg remains my favorite.) I especially liked the limited series co-starring Ms. Tree and Mauser from E-Man (I think his name was Mauser it's been quite some time)

Chuck: This sounds pretty cool. I have been reading through the Dick Tracy reissue volumes and have been enjoying Collin's insightful intros. I wish he would do more comics. I love the idea that Ms. Tree was the daugter of Joe Friday. Imagine the cool stories that could lead to! -- Mykal

As the great Irving Cohen would say, "Thanks for remembering!" Here's the official Ms. Tree page on my website: http://www.terrybeatty.com/MsTreepage.html

Mike Hammer met a woman named Michael Friday, too. I forget which of Mickey Spillane's books it was in. I remember Max Allan Collins referring to it in a Ms. Tree letters column.

Terry, that recent illo of Ms. Tree, that I plucked from your blog is really pretty cool.

I definitely miss her!