On the Tube: The Human Target 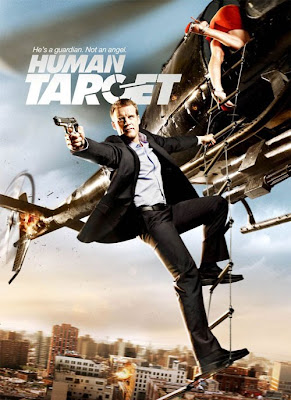 The new Fox TV series The Human Target, follows the life of Christopher Chance (Mark Valley), a unique private contractor, bodyguard and security expert hired to protect his clients by completely integrating himself into their lives, to literally become a human target. Chance is accompanied by his business partner Winston (Chi McBride) and hired gun Guerrero (Jackie Earle Haley). He puts himself on the line to find the truth behind each mission. Even his own business partner Winston doesn't know what drives him towards this dangerous life – becoming the human target. One sequence, featuring a confined-spaces fight onboard a high-speed train is extremely well-done and would have been right at home in a big budget Hollywood blockbuster.
Of course the original DC Comics version of The Human Target (created by writer Len Wein and artist Carmine Infantino) premiered in the pages of Action Comics #419, back in December 1972 and then later posted runs in The Brave and the Bold and Detective Comics. DC's Christopher Chance operated solely by "impersonating" his clients in order to eliminate threats to their safety, so this FOX television series spins their new version into a glorified bodyguard, rather than an individual who disappears into each respective role.
Valley was a fine choice to portray Christopher Chance, having that tough guy swagger down pat, plus he doesn't suffer from the usual pretty boy syndrome that often plagues action stars targeted for younger viewers. Valley would have fit right into this type of thing in decades past, in fact he would have been a better choice to succeed Robert Conrad as James West in the big-screen remake of 'The Wild, Wild West' a few years ago. Will Smith was badly miscast in that turkey of a film, but I thought that Smith would have been a remarkable Artemus Gordon (but that role went to the equally miscast Kevin Kline). Needless to say Mark Valley is a terrific man's man kind of performer, and Jackie Earle Haley, fresh off of his bravura performance in 'Watchmen' (as Rorschach) brings an equal level of gravitas to his supporting role of Guerrero, with quite a bit of mysterious back story elements suggested to keep his character interesting. Chi McBride is too much of a one-note actor for my tastes and I would prefer that they write off his role of Winston as a waste of time and thank god that they didn't feel the need to add an ongoing love interest for Chance.
It was really cool to have the luscious & talented Tricia Helfer from Battlestar: Galactica guest star as the series first client to contract the Human Target, but I must admit that the cameo by actor Danny Glover at the end seemed tacked on for no real purpose. Hopefully, The Human Target will have the chops to make an ongoing series, but for now I recommend it.
Posted by Chuck Wells at 7:42 AM