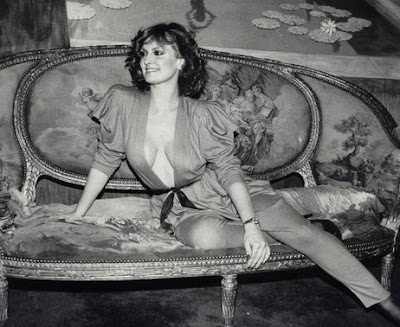 As I struggled to choose an appropriate "gal" this week, things took a turn into the eerie & bizarre as a notable celebrity cold case murder/suicide/death from January 2011 reared its head in the form of a new public appeal by police charged with investigating the circumstances surrounding the death of the 1975 Penthouse Pet of the Year. Born Marjorie Lee Thoreson, Anneka Vasta (aka Anneka di Lorenzo) was a 70s & 80s pin-up model and actress. She portrayed Messalina in the infamous softcore-porn film, Caligula in 1980.
Nine months after her death, the Naval Criminal Investigative Service is asking for public help as they continue to probe her death. Vasta's body washed up in San Diego County, and authorities want to know if anyone say Anneka Vasta before joggers found her naked body on a Marine training beach at Camp Pendleton on January 4 this year. She was apparently in such good physical shape that they initially believed her to be a teenage victim. The 58 year old was discovered with a broken neck and back, although she had wounds in her neck - possibly from a steak knife in her car (which was later found at a popular scenic overlook). Vasta was know to be a fragile personality type and was believed to suffer from paranoia, but her family insists that she was not suicidal. Federal agents are not able to say how Vasta got from a vantage point 60 feet above sea level, to the rocky sand below, more than a mile south.
Investigators believe that if Vasta had jumped from the bluffs below her car, her body would not have hit the water, because the tide is not high enough at the location. Although I truly hope that a solution to her unfortunate death can ultimately be determined, lets all take a moment to recall a lovely, vibrant and sexy woman, no matter what name she went by during her brief career.
Posted by Chuck Wells at 2:25 PM

I had the wonderful privilege of not only being able to call Anneka Thoreson Di Lorenzo (as I knew her) my friend, but my boss as well. I met Anneka in 1987 when I was working at a Casino in Los Angeles. Anneka came in as lead Cocktail Waitress to about 8-10 of us young lady's. She was an understanding, kind hearted, beautiful women. When ever any of us had personal problems, we knew we could go to Anneka. Not only was she our lead waitress, she was our friend, our mother, our big sister and our counselor. I don't care what anyone says, she was a good hearted person who had issues like every single one of us. The difference was the fact that she carried herself with such style and elegance. She was one of the strongest people I have had the pleasure to have in my life. The thing I would like to say is, "I agree with her family"! She would not leave her child,the horrible accusations/suggestions of suicide is gossip!!

Thank you for sharing this with us, and I admit to not having heard anything else about the status of this case. For the sake of her loved ones, and friends, I really hope a solution is forthcoming.

I'm grateful that you stopped by the Catacombs during my hiatus and wish you the very best!

She had some great tit's. 1st Playboy I snuck from my dad's room as a kid , 1st page I opened too was her. shaped my tastes both for tit's and for red heads the rest of my life.