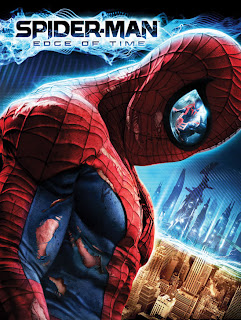 This week has been a bit too full of stuff & goings on. Month Two of the DC relaunch (blehh), Steve Jobs passing (a true innovator), well-known character actor Charles Napier passing, new books-movies-fall TV, etc. So bear with me for a few extraneous comments that I just wanted to get off of my chest and thanks for the kind indulgence.

Alan Davis joins regular writer Ed Brubaker as the ongoing artist of Captain America beginning with Captain America #6 and I am so there! Cap has enjoyed quite a bit of renewed popularity in recent years thanks to Mr. Brubaker (and a handful of topnotch artists), but as much as I like the "Living Legend of World War II", I haven't bought very many issues. Don't get me wrong, I was pleased with how they revived Bucky and set him up temporarily as the replacement for Steve Rogers as Cap, but Marvel has been a bit of a mess for me under the Quesada regime and the most that I can manage is to "cherry pick" those few things that actually entertain me. Right now that only includes Alpha Flight, Avengers: The Children's Crusade, and Thor. I hope that the Defenders relaunch will measure up, and I have no doubt that the presence of Alan Davis will make Captain America a do not miss.

What's up with "Lord of the Jungle" from Dynamite? Their upcoming adaptation of the classic Edgar Rice Burroughs hero Tarzan doesn't even bear his famous name. Shades of Disney. Has the House of Mouse driven off another public domain character, by locking up trademark rights to the name?  I mean that animated Tarzan flick they made in 1999 was good fun, but I have wondered how their version would impact other licensed or fair use of this character ever since. What is the status of the Burroughs estate these days and if they still retain their original ownership rights, why would they even want this title published without the most recognizable name in jungle lord history sitting on top of it?

Spider-Man: Edge of Time is an exciting new video game by the Activision-owned developer Beenox. The story was written by Peter David, and the game begins in the present day, as Peter Parker/Spider-Man battles Anti-Venom. But before long, Anti-Venom robs Peter of his powers and apparently kills him... 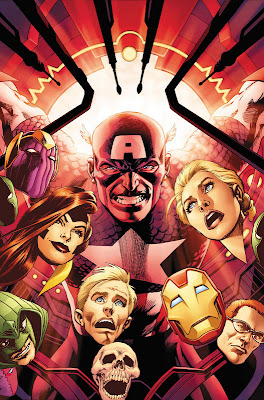 The game then rewinds to events in the year 2099. Miguel O'Hara/Spider-Man investigates the Alchemax scientist Walker Sloan. While spying on him, Miguel discovers Sloan's plans: to travel back in time and obtain power and fortune by founding Alchemax much earlier than it was originally established. Miguel arrives just as Sloan enters his Gateway, but jumps through the portal too late to stop him. Trapped between times, Miguel watches helplessly as the original Spider-Man is murdered by Anti-Venom and history is changed for the worse. Upon his return to 2099, having been unaffected by the time change due to being trapped in the portal when the change took place, Miguel discovers that Sloan's changes to the timeline have reduced New York City to a dystopia.
In the new timeline created by Sloan, Alchemax has been founded in the 1970s, apparently replacing the Daily Bugle, and Peter Parker himself works there as a scientist. Realizing this, Miguel uses Peter's DNA, stored within the company's archives, to create a chronal link between the two so that he can warn Peter of the truth about Alchemax and his impending death on the 66th floor of the building. This allows the two distinct versions of Spider-Man to join forces across time to set everything right. 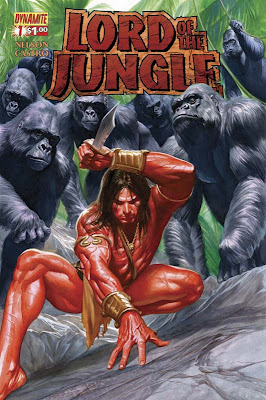 This game is superior to last weeks X-Men: Destiny, which although fun enough, was just too basic and abrupt in playthrough for the money. You can actually play X-Men: Destiny from start to finish in about five hours or so; not so much with Edge of Time. The graphics on this Spider-Man game are also much more intense, and there are many challenges to be experienced that will add to the overall gaming experience. Highly recommended!
Posted by Chuck Wells at 8:30 AM

As much as I like Alan Davis, it's not enough to overcome my general dislike of Brubaker's handling of Cap and Bucky and his writing style.

The deal with Dynamite's Tarzan I assume is they didn't want to pay the Burroughs estate the fees to use the trademark, which is well within their right since the first several books are public domain (or someone else is pursuing use of the trademark and it's tied up). This probably also explains the reasoning for decking him out with metal bracers and jewelry.

Hi Chuck: Disney had nothing to do with Dynamite not using TARZAN in the title of their new comic. ERB, Inc. owns all rights to TARZAN as well as JOHN CARTER. Both names are trademarked by ERB, Inc. and even though the novels are now in the public domain, because of the trademarks no company is free to use those names as a selling point for their product unless ERB, Inc. gives them permission. So their new TARZAN comic as well as their ongoing WARLORD OF MARS comics have to use titles that are not copyrighted or trademarked. This is why Dark Horse and Marvel can use those names, ERB, Inc. has a working relationship with them.
--Robert R. Barrett