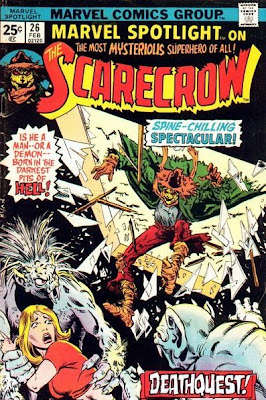 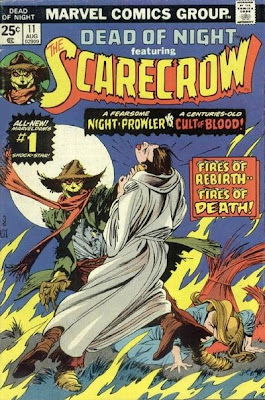 One of Marvel Comics least seen heroes, The Scarecrow, made his debut in Dead of Night #1 in 1975; which was the final issue of that short run series of reprinted horror stories. After an additional appearance (or two), the Scarecrow disappeared for years, but his back-story was fleshed out in recent years, with the end result that since a regular villain bears the same name, the heroic version is currently called the Straw Man. The following information is taken from Marvel’s own website:
"Centuries ago, the Straw Man opposed the demon Kalumai. During one of their early battles, the Straw Man ripped one of Kalumai's horns from his head and closed the gateway through which Kalumai manifested on Earth, sealing it behind an oil painting known only as "The Scarecrow". The Cult of Kalumai was virtually destroyed, and over the succeeding years the painting traveled from hand to hand as occultists tried to fathom its secrets and Kalumai attempted to reopen the gateway. Eventually, the painting resurfaced in New York. Cultist Gregor Rovik attempted to purchase it, but when writer Dave Duncan forcibly intervened so his younger brother Jess could win the painting, the Straw Man's attention fell on Dave. When Rovik stole the painting and tried to sacrifice Jess' girlfriend Harmony Maxwell using Kalumai's horn, the Straw Man apparently possessed Dave as the Scarecrow, reclaiming Harmony and the painting, and gruesomely destroying Rovik upon an animated tree, leaving Dave with no memories of these events.

Kalumai's agent Bartolome sought to retrieve the horn by piping night demons through the gateway, but the Straw Man banished Bartolome and his demons. When the painting was publicly displayed, Kalumai found a sympathetic onlooker and recreated him as an avatar of his power. While the possessed man battled the Fantastic Four's Thing (who had accompanied his blind artist girlfriend Alicia Masters to the showing at the request of Jess Duncan, who wanted his help in unraveling the mystery of the Scarecrow), the Straw Man presumably controlled Dave. Tricking Kalumai's pawn into sealing the painting/gateway permanently with Kalumai's own power, the Straw Man vanished into the burning painting, apparently taking Dave Duncan with him forever.
Later, the Straw Man joined the convocation of Fear Lords, powerful demons who thrive on fear. The Straw Man attended only to inform the others that Earth was under his protection and he would oppose their plans. To aid humanity in resisting their fear-mongering, he manifested under the name Skirra Corvus and created the "Horror TV" cable network to inoculate humanity against fear. Informing Dr. Strange of the Fear Lords' actions, the Straw Man's avatar was destroyed by the Lurking Unknown but left Strange the Scarecrow painting, through which he could return. When D'spayre betrayed the Fear Lords and absorbed their powers, the Straw Man returned and sacrificed yet another manifestation of himself to free Dr. Strange and defeat D'Spayre.
The Straw Man continues to observe humanity from his otherworldly home. Though he has acted as Earth's self-proclaimed protector, his true origins and motivations are known only to himself."
Posted by Chuck Wells at 2:24 PM