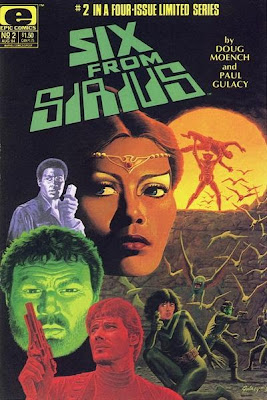 Six From Sirius was a mini-series created by Doug Moench and Paul Gulacy and published by Marvel's Epic Comics imprint in 1984. It was later followed by a 1985 sequel mini-series, Six from Sirius II. The plot featured the intergalactic adventures of six agents working for a governmental organization of the Planet Sirius-6. Set against the backdrop of outer space, the well-liked series was chock full of action, intrigue and suspense!
The team consisted of leader, Jakosa Lone, Grod, Starn, Zematin-Lar, Skreed and LaMasque, with major supporting characters Phaedra and Collator Jaquandor. The Sirius Six are tasked with locating five beings with crucial information (The Five Elders) who have to be found quickly or the galaxy will be plunged into total, final war! There was only one problem though, the five were dead!
I remember enjoying each of the two Six from Sirius minis, in particular the witty buddy-style banter between several of the characters seemed lifted from any number of big budget genre blockbusters. Gulacy's richly painted artwork on these books was so intricately detailed that some panels appeared almost to be photographic in execution.
Having regularly scaled back large portions of my personal collection for extra dough as I was raising a family, I haven't actually had copies of these issues for many years. My memory of them isn't quite what I would like it to be, but needless to say I have never completely forgotten these very fine books. I am a bit stumped to find so little written about them online, so if you are interested in reading them, you will just have to take my word for it that they are worth tracking down and if it helps, Dynamite has reissued a collected volume of at least the first mini-series.
Posted by Chuck Wells at 12:51 PM

I picked these up about 10 years ago for $1 each! I think they can still be had for about $2 each from Doug Sulipa, if yr innerestid. IN ANY EVENT, the art is smooth and sweet as a dream of ice cream! Just wonderful great wonderful work, both series. Gulacy did another series--for DC--around the same time, maybe a bit after the 2nd series. Can't recall that one off-hand, but it too, was suh-WHEET. Can't beat this bidniz. Thanks for bringing pleasant memories to mind!

You might be thinking about "Slash Maraud" by Gulacy.