From the Dust Bin: Tales of the Armorkins #1 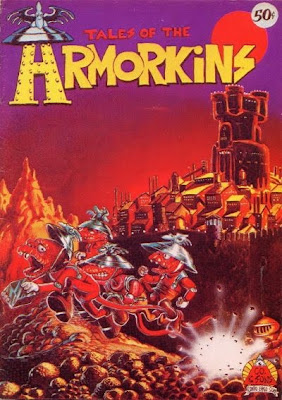 Every now and then you come across a comic book that's just not worth your time, and sadly this is the same mindset that currently keeps me from being a regular visitor to direct comics shops. How the industry manages to field so many titles of so little interest is frankly beyond me, but let the corporate and editorial bean counters who've run Marvel and DC (in particular) into the grave continue doing so without my able assistance.
That statement has absolutely nothing to do with today's dust bin selection, except the "not worth your time" phrase, which does.
Tales of the Armorkins #1 was published in 1971 by The Company & Sons. The entire issue is by artist Larry S. Todd, and forgive me if I can't really tell you what it's about. The inside front cover blurb starts, "An alien spaceship enters the sky and the natives are distraught, uptight and uncool ...".
That's exactly how I felt after trying on three separate occasions to read this mess. Distraught, uptight and uncool! Skimming through it doesn't help fill in the blanks either, so this standalone issue is basically about a bunch of weird little red aliens called Armorkins. There you go!
My brother David passed this item along to me and he reports that he originally read it while sitting on the toilet. He was at least able to flush part of that experience away.
According to the Grand Comics Database, The Company & Sons published nine single comic books, including this one. Their other titles were All Duck, Bogeyman Comics, Drool Magazine, Honky Tonk, Paranoia, Psychotic Adventures Illustrated, Young Lust and The Collected Cheech Wizard. Well known creators Vaughn Bode, Ralph Reese, Larry Hama, Bill Griffith & Art Spiegelman all produced work for this underground publisher.
I've got a really nice copy of this book if anybody wants to make a better go of it than I did. Let me know, and it's yours - first come, first served!
Posted by Chuck Wells at 10:42 AM

Maybe when we do not understand what the story is trying to convey to us, it is just then a means to free-association while enjoying and thinking about it.

My uncle is larry S. Todd....he is an incredible man...i am a 23 yr old female and purchased this comic off of ebay a few years ago...i have not a clue what it is about either, but my uncle is a brilliant/extraordianry man....there is a method to his madness, although i have not clue what it is!