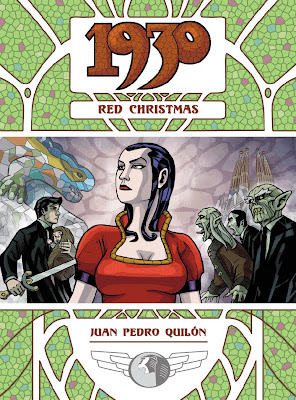 Juan Pedro Quilón contacted me just before the last New York Comic Con where he was shopping around his ashcan of "1930: Red Christmas" to publishers. Juan had flown in from his native Spain to peddle his talents (and portfolio) in an effort to break in to the comics industry. "Red Christmas" is a short story that is included in his sixty-four page graphic novel "1930: Barcelona at Night".
Juan Pedro Quilón studied Fine Art at the Technical College of Valencia and later co-founded the independent publishing house, 7 Monos. He has contributed to various fanzines and is the author of "Future Imperfect" which blends science-fiction, cyberpunk and medieval fantasy elements.
On the surface, Red Christmas is illustrated in a clean, fairly innocuous kind of style, but once you are drawn into the story, you quickly discover that this little vampire tale has a real bite to it. I hope Juan is successful in securing a publisher for his work and encourage you to visit his website (here) for more information on his works. Fans of Buffy the Vampire Slayer would really respond to this kind of story.
Posted by Chuck Wells at 4:21 PM