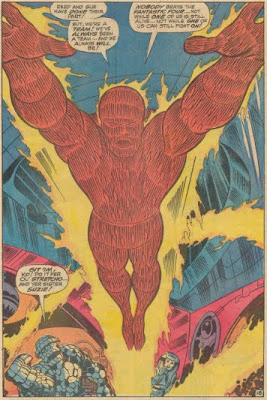 Chilling out today in the wake of the South's first "white" Christmas in many decades. Yesterday would have been an awesome day overall if not for the gut-buster of a headache that I was sidelined with. Thankfully my three grown children visited their mother across town for a few hours while I crashed into a drug-induced fog, snuggled up with my pug Bandit, in order to salvage the latter part of the evening with them as the snow really began to fall.
So....
January's issue of Fantastic Four supposedly kills off one of the founding members of the classic Silver Age team that kick-started the Marvel Universe. Bummer!!
I'm going to fall on the pungee stick and "guess" that the Human Torch is the upcoming fatality. I've read some speculation online that makes a good case for Reed "Mr. Fantastic" Richards, Sue "Invisible Woman" Richards or Ben "Ever-Lovin, Blue-Eyed Thing" Grimm being the intended casualty, but all three seem to be poised to die - based on current story lines - and that has me "guessing" if that is nothing but smoke & mirrors on the part of the writer. Therefore, right or wrong, I'm out on a limb here for a few weeks in my pick of Johnny Storm being the team member getting killed; plus I'll even go a step further and make an actual prediction.
Johnny is going to die saving the life of the temporarily human, Ben Grimm. There I said it!
Art (above; right) by Jack Kirby & Joe Sinnott.
Posted by Chuck Wells at 10:51 AM