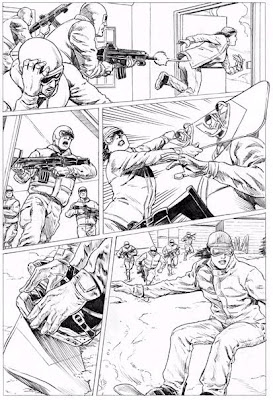 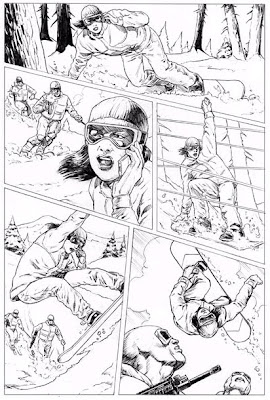 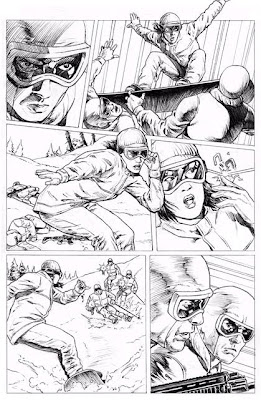 I've previously run promos - thanks to Ed Catto - of the upcoming CAPTAIN ACTION WINTER SPECIAL (Available January 2011), which features work by Beau Smith and Eduardo Barreto.
Today I'm posting half of what was intended to be a joint interview with writer Tony Lee and artist Reno Maniquis, the creative team on the Specials "Lady Action" chapter. Unfortunately,Tony is swamped with work at the moment and wasn't able to get his portion to me, but if his schedule frees up, I'll run that piece later on.
As part of the A.C.T.I.O.N. Directorate, "Lady Action" is the world’s second favorite British Agent, in a fun filled, pun filled romp called "The Spy Who Snowballed Me". I appreciate Reno taking the time to share his thoughts with us, plus a bit about his background.

Reno - I'm a comics artist veteran in my native country, the Philippines, more than 20 years now. For the US market, I've illustrated some stuff for independent publishers, like Wall of Angels for TwentyToSix Books and some short stories here and there. I''m also doing art for Graphic Classics, and of course Moonstone, where I've done a couple of issues of Domino Lady, the Phantom/Captain Action miniseries and some issues of Captain Action Season 2 (and the upcoming winter special).

Q) Which creators inspired you growing up and what stuff do you follow these days?

Q) Give me the basics on "Lady Action" and what we can expect from stories featuring her as lead character?

Reno - I really have no advanced info on what will happen with Lady Action. Ed Catto can give you a much clearer picture of that. But from what I've seen from drawing the character, she's the British counterpart of the US Captain Action. From what I can tell, she has much more experience and training than Captain Action, and she is also a lot more self-confident. She's able to think of ways to get out of a jam on the fly, and I think that's a very appealing trait of the character.

Q) I thought your "Lady Action" artwork was perfectly in sync with popular photo-realistic stuff like Marvels "Ultimates", while remaining very cinematic. What type of art tools do you normally use to create those beauties?

Reno - I use photos a lot as reference, especially for the lighting and expressions. I also do storyboards for TV commercials, so I guess that helps me with drawing stuff from all kinds of angles similar to what you'd see on the screen. But I guess what makes my style different from the other photo-realistic stuff is that I render my drawings in a bit of an "old school" style, like something you might see from the wave of Filipino artists who came to work for the US during the seventies.

Q) Has it been hard to break in to the comics publishing field during a tough economy?

Reno - I think nowadays with the Internet, it's much easier for artists to break in, as opposed to a decade ago. I used to send samples via snail mail during the 90s and also showed my portfolio a couple of times at conventions when I went to the US during that decade but had no luck breaking in. But a few years ago I just posted my portfolio online and e-mailed some small press publishers my work, and that got me started in working for the US comics industry.

I guess that's it. I hope I've been helpful! –Reno.

Thanks, man! I appreciate it and good luck with the Captain Action Winter Special.
Posted by Chuck Wells at 5:18 PM

Thanks for the feature!

You are most welcome!

That was a fun and breezy interview, and I wish Reno all the best. His art for LADY ACTION is awfully snazzy. :)

Very well-constructed and dynamic layout work, Reno. Good job with the figures as well. For some reason, I really like the final frame with the two guys exchanging a glance -- nice composition and drawing.