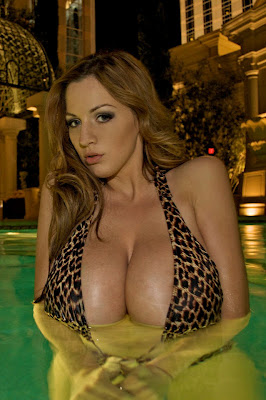 I occasionally consider choosing a specific pin-up queen that could suitably represent the overarching themes of The Comic Book Catacombs. It’s a tall order mind you, given an infinite number of lovelies that would potentially qualify for such a lofty status. Bavarian beauty Jordan Carver has previously appeared as an official “Gal” Friday selection (November 2010) and she is definitely on my personal Top Ten list. Just look at her incredible 32HH assets (boy, howdy). I found these ultra-fine photos from an entire photo shoot that shot wearing this leopard print bathing suit. I’m not posting them all, to encourage you to conduct your own web search for the remainder (you will be glad that you did). German born, and current resident of the state of , this phenomenal "gal" definitely deserves consideration should I ever get around to naming a single “gal” for the ages.
Posted by Chuck Wells at 10:44 AM