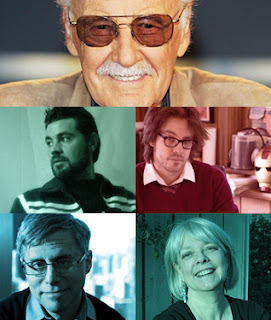 Plans are afoot to bring yours truly to the Queen City of the Carolina's - aka Charlotte, NC - in two days hence for the 30th annual Heroes Convention. As their website says: "Few national-level comics conventions have the kind of reputation and acclaim that Heroes Convention does. With a comics-first attitude, a family-friendly atmosphere, and one of the most impressive guest lists in comics, Heroes Con has become the biggest "little" comics show in the country. But not by accident: what makes our convention great is our strong foundation in comics, a long dedication to the highest-possible level of quality, and an independent approach that lets us stand out from the pack in the minds of fans, creators, and exhibitors alike." 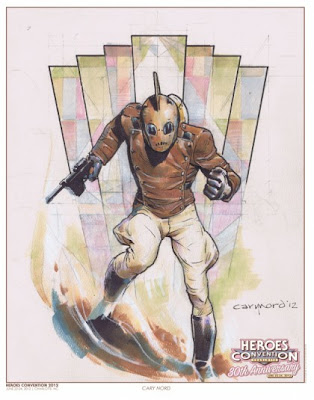 With a guest list numbering in the hundreds, there will definitely be something for everyone to see this year. Stan "The Man" Lee headlines a diverse group of writers (pictured, above; left) this year that also includes Jonathan Hickman, Matt Fraction, Paul Levitz, Louise Simonson, and many others. If you are more a fan of artists, then you might be pleased to meet the likes of Neal Adams, Frank Cho, Geof Darrow, Francesco Francavilla, Michael Golden, Jaime Hernandez, Adam Hughes, Bob Layton, Ed McGuinness, Mike Mignola, Cary Nord, Earl Norem, George Perez, Ivan Reis, Jim Silke, Walt Simonson, Lee Weeks, Bernie Wrightson, and Mike Zeck (making his first convention appearance since the early 1990s) and those great names are literally just the tip of the iceberg. Check out this years incentive art print for fans who pre-purchased tickets by Cary Nord commemorating another 30th anniversary, that of Dave Stevens "The Rocketeer". Heroes Convention 2012 runs from June 22-24, and is not to be missed. See you there!
Posted by Chuck Wells at 12:19 PM