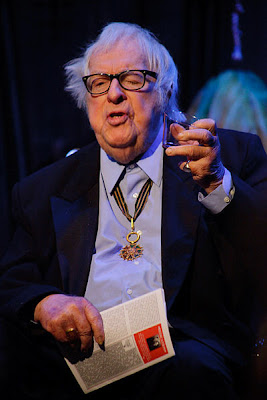 One of the Grand Masters of Science Fiction, author Ray Bradbury passed away quietly in his sleep last night at the age of ninety-one. His stellar writing career was built upon a string of seminal 1950s works that became standard reading in schools across the world: The Martian Chronicles, Fahrenheit 451, Dandelion Wine, and Something Wicked This Way Comes, were followed by over 400 novelettes, shorts stories, screenplays, teleplays, and anthologies. He was one of the most celebrated 20th century American writers of speculative fiction. Many of Bradbury's works have been adapted into comic books, radio broadcasts, television shows or films such as It Came from Outer Space, The Beast from 20,000 Fathoms, The Illustrated Man, The Martian Chronicles, Fahrenheit 451, Something Wicked This Way Comes and he also adapted the Herman Melville novel “Moby Dick” in 1953 for director John Huston. That classic film starred Gregory Peck as Captain Ahab. The Catacombs extends its condolences to his family, friends and fans.
Posted by Chuck Wells at 12:59 PM