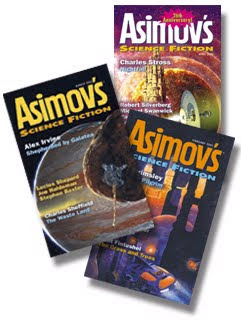 Asimov's Science Fiction celebrated its thirtieth anniversary in 2007, the magazine's current editor is Sheila Williams. After years of sampling random copies this excellent genre digest, I finally subscribed last January, and have simply devoured each subsequent issue. It is currently published by Dell Magazines 10 times a year, with double issues in April/May and October/November.
For cutting edge short fiction, you just can't beat this package. Asimov's stories have won numerous awards, including at least 40 Hugo awards and 24 Nebula awards. The magazine's editors have received 17 Hugo awards for Best Editor.
As a head's up to any Catacombs comic book fans who also enjoy science fiction, this is an unbeatable source for hours of pure reading pleasure. As a bonus, reading Asimov's is akin to channeling the old pulp magazines, even though you can also go the techie route and download each issue online. My subscription lapsed during my separation late last year, and I'm about to renew it now that I've established a new mailing address. Why not join me?
Recommended!!!!
Posted by Chuck Wells at 5:10 PM