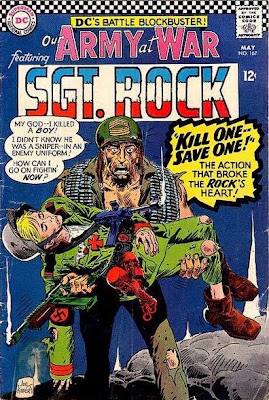 Our Army at War #167 (May 1966) stars Sgt. Rock of Easy in “Kill One – Save One!”; written by Robert Kanigher and illustrated by Joe Kubert. In this issue Easy Company stalwarts Bulldozer and Ice Cream Soldier amuse themselves by betting on which of their top-kick’s many battles was his roughest. Of course, Rock himself overhears their foxhole debate and while their picks bring back memories for old Frank (conveniently allowing Kubert the opportunity to draw these vignettes); it is an altogether different engagement that Rock recounts to the readers as his own roughest battle.
On an earlier two-man patrol with fellow grunt Pappy, Rock and his subordinate were fired upon by an unknown sniper. Pappy got drilled through the heart as he was reminiscing over his family back home, but Pappy’s demise allowed Rock a single moment to identify the treetop hideaway before he wildly sprays the gunners nest with his own burst. However as the snipers helmet rolls away, Rock is horrified to discover that he is just a boy in a man’s uniform, one of Hitler’s own handpicked “werewolves”. Struggling to come to terms with his actions, Rock is taken unawares by yet another of the youthful werewolves, who chooses to take the sergeant prisoner rather than shoot him.
Along the way, Rock’s veteran combat sensibilities recognize the likelihood that an open field might be mined, but the boy sloughs off Rock’s suggestion as a trick and pings another shot off of the captive sergeants helmet, knocking it onto the field where – you guessed it – a series of mines erupts in sequence. The young werewolf takes some shrapnel in his leg and also loses his rifle, but as Rock picks the wounded boy up, he finds that he has a death-grip on a live grenade and the Rock is still his prisoner.
Before long the two are targeted by a strafing fighter plane and driven into a nearby farmhouse, but that won’t stop the fighters deadly aerial bombardment moments later. Sgt. Rock leaps to safety, but hearing the boys weakened cry for help, Rock quickly dashes back to retrieve him. This heroic effort wins the boy over and he declares that Hitler had lied to the "werewolves" when he had said that the Americans would show no mercy. This is great, great stuff by the classic team of Kanigher & Kubert.
Plus, a second neat feature written by Howard Liss and drawn by Jack Abel details the story of a wounded German soldiers forced retirement and how a wayward GI patrol allows him an opportunity to engage in “One Last Fight!”
Thanks for handing this gem over, David!
Posted by Chuck Wells at 3:50 PM

Chuck: A gem indeed! This issue is a fine example of why Silver Age DC war comics were the best war comics every done. The Kubert/Kanhigher team just had it all going on. Those comics, more than any other, tapped into the inherent drama (even melodrama) of men in combat. Just brilliant stuff.

Great Post and a wonderful rundown of this classic. -- Mykal