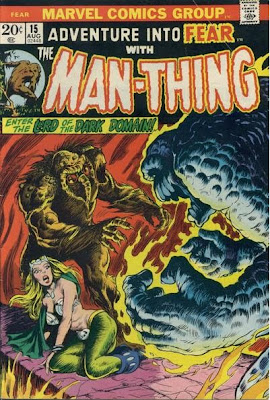 The Man-Thing stars in "From Here to Infinity", written by Steve Gerber, pencilled by Val Mayerik and inked by Frank McLaughlin for Marvel Comics, Adventure Into Fear #15 (Aug. 1973). This fear-fraught tale begins with New York City under direct attack of the United States Air Force and the city's own citizens are struggling to prevent police forces from storming the United Nations building. Elsewhere a riot is underway outside the White House and this madness has swept across the globe consuming Moscow, Berlin, Peking and Paris. Mass insanity is the order of the day!
In a backwater town in Florida, Joshua Kale and his grandchildren, Jennifer and Andy debate this conundrum, the result of an inter-dimensional demonic invasion. It seems that elder Joshua Kale is the potentate of the Cult of Zhered-Na, but the mystical book that could help him in stopping the invasion is missing. Suddenly a phone call alerts the Kale's that Man-Thing is running amok in town. No sooner do they arrive to aid the creature, when they bear witness to his demise, with only Joshua understanding that this is due to demonic influence and not the assault of the townspeople. Jennifer who has grown soft on the Man-Thing's alter ego, Ted Sallis, is overcome by his loss.
Back at home, Joshua Kale summons the other members of the Cult of Zhered-Na and together they invoke mystic forces which reveal the hidden history of "The Tale of the Tome". This ancient book was the property of antediluvian sorceress, Zhered-Na, who had correctly foretold of the imminent sinking of Atlantis, only to be banished for her efforts. Cast asea where she drifts aimlessly for a period of weeks, Zhered-Na receives prophecies of future wars and the rise of costumed heroes like Captain America and Spider-Man, before she eventually lands ashore. Wandering for uncounted days, Zhered-Na discovers a lost colony of Atlanteans and makes her new home among them. However, even this is short-lived as tremors resulting from the sinking of Atlantis compel the local citizenry to rise against the sultry sorceress, blaming her for the continents destruction. She is slain, but not before sending her followers to safety with her warning to perpetually preserve her prophetic writings. This is of little comfort to the cults modern day successors as Joshua Kale and company find themselves instantly under siege from demons.
Nearby, Jennifer Kale sits distraught at the edge of the swamp, the very same place that Man-Thing's muck-encrusted form was cast by the townies. However the enchanter Dakimh, last of the ancient disciples of Zhered-Na, appears to her and garbs her in the manner of a priestess to assist him and the resurrected Man-Thing in battling the demonic invaders. Dakimh had intervened in town, making it appear that the Man-Thing was slain, when he actually was not. Thus the eons-old sorcerer, the muck-monster and the novice priestess move through time and space to retrieve the tome from the Dark Domain. Sadly as they arrive and the issue closes, Jennifer Kale and her two companions find the members of the Cult of Zhered-Na imprisoned in a land of holocaust, where Man-Thing is forced into combat with a being formed of mass molten rock, The odorous titan soon wilts from the beasts heat, until Jennifer masters the tomes archaic language simply by grasping it and casts a spell, sending them all back home and ending the invasion.
Jennifer takes no comfort from her victory as a side effect of her win is that the tome itself vanishes from sight and breaks the psychic bond that she had temporarily enjoyed with Man-Thing, who shuffles off into the mire.
My appreciation of bronze age Marvels was a bit tested by this issue, as the books star actually takes a backseat position within the tale to several other characters. Man-Thing is almost a third-stringer here, and perhaps the overall story arc minimizes this aspect, but without the earlier issues I just don't know. Mayerik's artwork isn't fleshed out by McLaughlin's inks. Mayerik was usually much better over in the Supernatural Thrillers series, where he drew the Living Mummy feature. I would have to say that these two talented artists styles simply didn't mesh very well on this book, and Gerber turned in a plebeian effort at best with this issues script. This issue wasn't bad mind you, but I've read better bronze age horror from the House of Ideas. The reading experience was salvaged somewhat by Frank Brunner's terrific front cover illustration!
Posted by Chuck Wells at 8:37 PM

Chuck: That is a staggering cover. What beautiful inking! that's one I would love to see in Black and White! -- Mykal