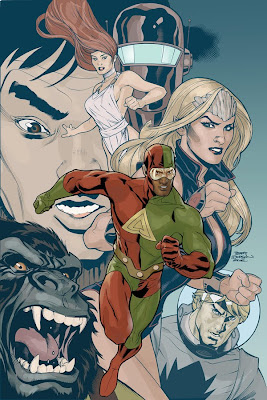 Marvel Comics is planning to launch another "Heroic Age" series using their retro-1950's super team, the Agents of Atlas. Jeff Parker will return as series writer, and that's a good thing in my estimation, but comic books are a visual medium and the decision to have Gabriel Hardman also return as lead artist disturbs me.
Newsarama ran a promotional article on the new title (now to be called simply "Atlas") a few days ago and within the body of that article it's mentioned that despite the first ongoing AoA series being cancelled last year after a mere eleven issues, the characters remain popular. So it begs the question: If the previous series failed during its freshman year, and if the characters actually resonate with the fans, then why - oh why - bring back an artist whose work didn't really grab readers in the first place?
I do have to say that bringing any version of 3-D Man back into the team is the right thing to do. The characters who comprise the Atlas team originally debuted as a non-canonical group of Avengers in What If #9 (June 1978), they were reintroduced in modern continuity (minus #-D Man) in a 2006 mini-series drawn by Leonard Kirk and written by Parker.
I would love to support this title, but after the artwork on their previous series failed to grab me, and despite having 3-D Man back in the mix, with Hardman on board - I won't be. I do believe that the Agents of Atlas are popular with fans, hey even I like them, but you still have to have an artist that fans respond to. Hardman has proven otherwise, and somebody at Marvel knows this. Why else have that spiffy Terry & Rachel Dodson gracing the new 1st issue cover?
Posted by Chuck Wells at 2:42 PM

I was so disappointed with the ending of the mini and then the ongoing opening with them feeding badguys to the dragon they allied with, the negatives outweighed the good. And these are supposed to be the good guys and are using them to help promote the company's "Heroic Age"?

Add the writer's tendencies to sap the wonder out of characters and making them more mundane ie Marvel Boy now in gray and calling himself the Uranian and taking the other more superhero character 3-D Man out of the picture originally... Now, they are adding 3-D Man but it's not the original, it's the legacy hero Triathlon usurping the other's id.