At the Movies: The A-Team 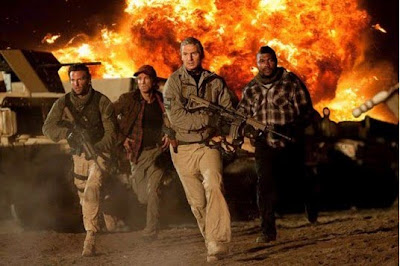 I was never a fan of the original 1983-1986 television series, The A-Team, about a group of ex-Army Special Forces who work as soldiers of fortune while on the run from the military after being branded as war criminals for a "crime they didn't commit". That NBC series starring George Peppard, Dirk Benedict, Dwight Schultz and Mr. T, was a bit too cartoonish for my tastes.

I did however feel that it was exactly the type of old show that could make a terrific theatrical film. With an update setting it within the real world context of the Iraq War, The A-Team is back and now I am a fan.

Col. John "Hannibal" Smith (Liam Neeson), Lt. Templeton "Faceman" Peck (Bradley Cooper), Capt. H.M. "Howling Mad" Murdock (Sharlto Copley) and Cpl. Bosco B.A. Baracus (Quinton “Rampage” Jackson) are a highly-regarded, elite combat unit stationed in Iraq. After being set up as fall-guys in an elaborate internecine theft, the guys are busted in rank and sent to separate military prisons. Of course, Hannibal is always three steps ahead of his enemies and plans the ultimate escape and revenge scheme. Meanwhile DCIS agent Charissa Sosa (Jessica Biel; yummy) intends to recover the missing items that the team is believed to have taken and see them all returned to prison.

I am aware that the film has received a mixed response from critics. But I don’t understand that at all. The A-Team is a topnotch revival of this concept, with a terrific cast (wonderful chemistry between the four team members) and all the slam-bang special effects of any other summer blockbuster.

Ignore the bluster and go see this one in the theaters. I highly recommend it!
Posted by Chuck Wells at 9:11 PM

I went the first weekend, and was impressed. Unfortunately, most of America decided that the reboot of the Karate Kid was more important. I am definitely getting A-Team on DVD to savor this.

That settles it... I'm gonna see it! I really wanted to all along but people kept satying it sucked.

I love everything Cannell ever created, anyway.