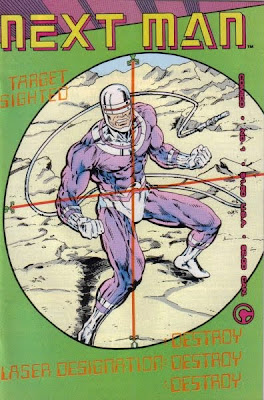 I've still got more to say about the past weekends huge and phenomenal Heroes Convention in Charlotte, NC, but for today let me post this item that was sent to me by Ric and John. Thanks guys!

Next Man was originally created by writer Roger McKenzie and artist Vince Argondezzi for Comico back in 1985, the series which lasted for only five issues told the story of David Boyd, an American soldier who was critically wounded during the Vietnam War and frozen until medical science would be sufficiently advanced enough to heal his injuries. Seventeen years later an unscrupulous doctor used David as a guinea pig in a classified government genetic experiment dubbed Project Stepping Stone, which was intended to create an army of "Next Men" David Boyd was revived possessing superpowers and thrust into a world he didn't recognize, by a man he didn't trust, so he escaped from the project to wander the United States while he figured out a way to stymie the goals of Project Stepping Stone.

Please follow the link (below) to read about recent efforts to relaunch this character: http://www.prlog.org/10706881-veteran-super-heroes-find-new-life.html
Posted by Chuck Wells at 9:26 PM