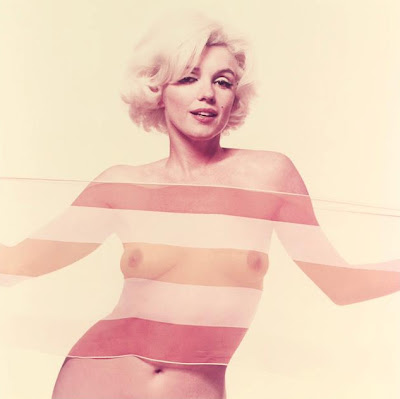 Actress, model, and singer, Marilyn Monroe became a major sex symbol in a string of successful films during the 1950s and early 1960s, before her untimely passing at the age of thirty-six in August of 1962. Much has been written about the truly iconic “Norma Jeane Mortenson” but whether your fascination leans towards her fine comedic talents, her smoldering onscreen sexuality, her tempestuous public relationships, or her troubled upbringing as a foster child, Marilyn surely made one hell of an impact. Just a few of her notable movies include The Asphalt Jungle, All About Eve, Monkey Business, Clash by Night, Niagara, Gentlemen Prefer Blondes, How to Marry a Millionaire, The Seven Year Itch, Bus Stop, Some Like it Hot, and The Misfits. She famously became the first pin-up for "Playboy" magazine when a calendar photograph (taken in 1949 while she was a struggling model) was recycled. As I promised last week, here is this “Classic Cutie” immortalized by photographer Bert Stern (originally for Vogue magazine). Published after her death, this image was part of session that became known as 'The Last Sitting'. They don’t really make them like Marilyn anymore, and topless or not, this fine picture is definitely art worth viewing (the entire series of shots is available online; check them out).
Posted by Chuck Wells at 12:50 PM

never found her face attractive I tend to like more exotic type woman non white asians or latinas but this body looks good. I could see why she was boned by the kennedys