Although initially conceived to be the subject of a series of prose stories (set in a post-apocalyptic Chicago), Grimjack was the street name of John Gaunt, a sword-for-hire, ex-paramilitary, war veteran and former child gladiator. He actually operates from Munden's Bar in the Pit, a slum area of Cynosure, a pan-dimensional city to which all dimensions connect. Co-created by John Ostrander and Timothy Truman, although as indicated the general premise and setting had been set before Truman came on board, the character first appeared as a backup feature in Starslayer #10 (Nov.1983) published by First Comics. Grimjack #1 was later released in August of 1984 (with the series running for 81 issues).

Following the bankruptcy of First Comics in 1991, the legal rights to Grimjack became tied up with First Comics' other assets. After 12 years of efforts, all rights to Grimjack were released and a new company was founded, with legal ownership to the character. John Ostrander and Timothy Truman are said to have "substantial equity positions" in the venture. 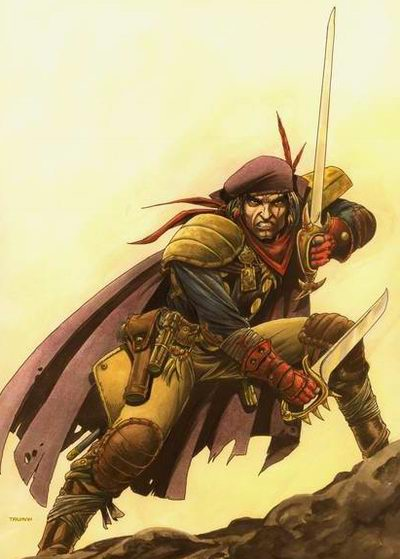 On Monday actress Yvonne Craig lost her grueling two year battle with breast cancer. Of course everyone knew her as "Batgirl" from the classic 1960s television series, but she made memorable impressions on other well-loved series such as Star Trek, The Mod Squad, 77 Sunset Strip, Voyage to the Bottom of the Sea, The Man from U.N.C.L.E., The Wild Wild West, and many others. She appeared twice on film with Elvis Presley. Her trained dancers figure made her a popular glamor, pin-up and ad model during her heyday, and her long film and television resume belies the fact that she did not originally pursue an acting career.

Yvonne Craig benefitted from both her ballerina figure and her pixieish features and both aspects made her a great choice to bring the comic book heroine to life, inspiring many fans such as comic book writer Gail Simone to enter the industry. Ms. Craig was seventy-eight years old. The Catacombs extends its sincerest condolences to her family, friends and fans. 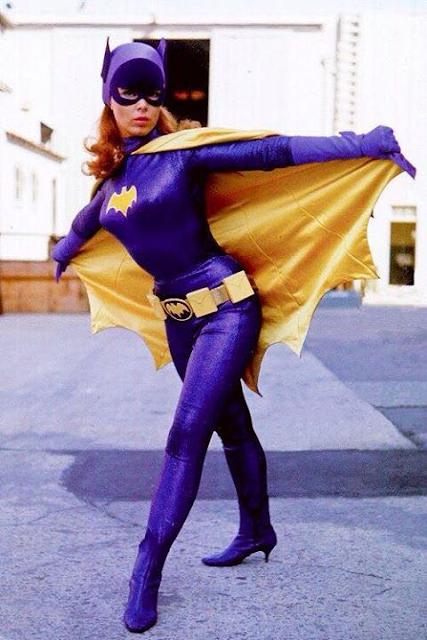 Posted by Chuck Wells at 8:32 AM No comments:

After introducing Johnny Blaze as their supernatural-motorcycling “Ghost Rider” Marvel renamed their earlier western hero to the unfortunate Night Rider (a term previously used in the Southern United States to refer to members of the Ku Klux Klan), during the mid-1970’s for a short run series. Carter Slade battled evil while dressed in a phosphorescent white costume, complete with a full-face mask, cape, and the requisite white hat. Slade had received this outfit and his white horse from Flaming Star, a Native American shaman. Eventually, the modern era Ghost Rider Johnny Blaze found himself transported into the 19th century where he met and teamed up with Carter Slade. Carter was badly wounded and Blaze took him to Flaming Star to be healed and then dealt with Carter's enemies. Carter recovered and Johnny returned to the present.

After Slade's death in Western Gunfighters #7 (Jan. 1972), his sidekick Jamie Jacobs became the first of several successors, as in Marvel continuity after Slade's death, the name Phantom Rider was used retroactively for Slade and those who followed him. Carter Slade's spirit however returned in the modern era and possessed his descendant Hamilton Slade to make him a new Phantom Rider and rode out to rescue Johnny Blaze from certain doom.
Posted by Chuck Wells at 2:21 PM 1 comment:

Vampirella initially appeared as a hostess-type character in Warren Publishing's b& w horror anthology Vampirella #1 (Sept. 1969), Forrest Ackerman created or at least had a strong hand in shaping the lighthearted "bad-girl story style" of the feature but Vamp was designed by veteran comics artist Trina Robbins.  Later the hostess aspect was dropped and the strip began focusing on the characters ongoing adventures, José González became the character's primary artist starting with issue #12.


Vampi was not your typical supernatural vampire, as she hailed from the planet Drakulon, although she did possess various attributes related to vampirism such as shapeshifting, immortality, superhuman strength-speed-senses, enhanced night vision, a healing factor, flight, hypnosis and telepathy. 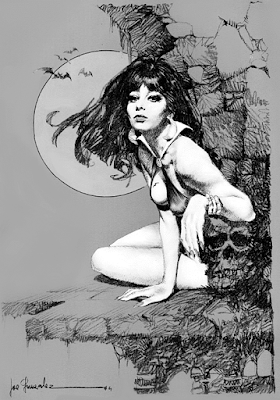 Her original series ended with #112 in 1983, although Vampirella has continued to be revived under the auspices of other publishers.
Posted by Chuck Wells at 11:38 AM No comments:

Although an original concept dating back to the golden age The Manhunter (with the same civilian identity of Paul Kirk) was revived in 1973 by Archie Goodwin and Walt Simonson as a back-up feature running through Detective Comics #437 [“The Himalayan Incident”] and ending with #443. While lying in suspended animation, as the result of a mortal wound suffered during a safari; an organization known as the Council had genetically altered the Manhunter to enhance his healing ability. Decades passed before the Council revived the Manhunter from suspended animation and trained him to lead a branch of warriors who were actually cloned versions of the Manhunter himself. The training involved intensive exercises in various forms of fighting such as martial arts and armed combat. The Manhunter was also updated with a different costume and various weapons. He later learned that the Council was the true threat to humanity and chose to oppose them. 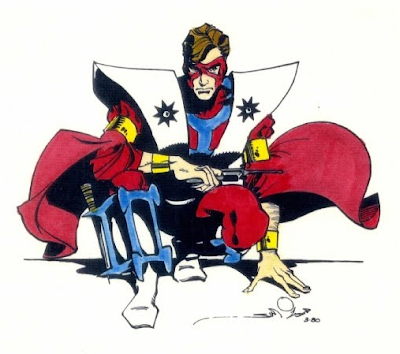 After the Manhunter eventually escaped from the Council and waged an on-going conflict with them he acquired some allies such as the Batman and some others. In a final showdown Paul Kirk, the Batman and their allies invaded Council headquarters and defeated their forces. One of the Coucil members managed to fire a fatal burst of intense radiation at the Manhunter. As he lay dying, the Manhunter used the Council member's own psionic helmet to destroy the organization’s headquarters killing himself, his clones, and all of the Council members.
Posted by Chuck Wells at 10:11 AM No comments: 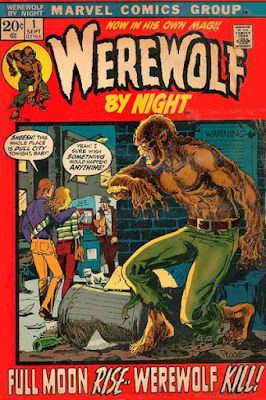 Werewolf By Night first appeared in Marvel Spotlight #2 (Feb. 1972) although who created what aspects of the character comes down to something like the premise being based on an idea by Roy Thomas, while the series name was suggested by Stan Lee, and yet the debut story was created by Gerry Conway and Mike Ploog. The characters self-titled series began in September 1972 (lasting for 43 issues which ran through March 1977). Issue #32 features the first appearance of Moon Knight. Jack Russell (aka the Werewolf) briefly co-starred with “Tigra” in Giant Size Creatures #1 (July 1974), which first featured the transition of Greer Grant into the new role of Tigra (instead of her original identity as simply The Cat). The series was retitled Giant-Size Werewolf with its second issue.
As the Werewolf By Night, Jacob Russoff (his given name) obviously had the ability to transform into a werewolf, which gave him superhuman strength, speed, stamina, agility, durability, reflexes and a heightened sense of smell; plus an accelerated healing factor and razor sharp claws and teeth. 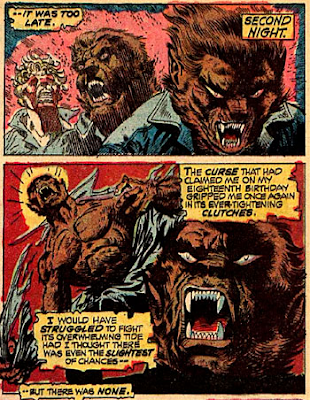