After hearing over the recent weekend that Hall of Fame legend Steve Ditko had passed away sometime in and around June 29, 2018 due to numerous health complications, I realized that over the past year or so a number of other comics industry luminaries had left us and I either never got around to featuring them in the Catacombs (or became too busy, and the opportunity passed).

So today in acknowledgement of the huge impact that Mr. Ditko made upon the comics art form, I want to back up and include a lengthy list of his contemporaries who have also left us since last year.

STEVE DITKO created numerous characters for several publishers including The Creeper; Hawk and Dove; Mr. A; The Question; Captain Atom; Shade the Changing Man and The "Silver Age" Blue Beetle (Ted Kord). It was of course his ground breaking work as co-creator of the Amazing Spider-Man and Doctor Strange that cemented his status as one of the cornerstones of the Marvel Universe, and like his contemporary, Jack "The King" Kirby, the importance of Ditko's role in the early days of Marvel can be clearly seen by how many of his actual creations have prominently been featured in those blockbuster Marvel Studios films we all love. Think about it! In the various Spider-Man and Hulk movies alone we have seen classic Ditko creations such as Betty Brant; Electro; Mac Gargan; J. Jonah Jameson; The Leader; The Lizard; Aunt May; Mysterio; Doctor Octopus; Harry & Norman Osborn; Gwen Stacy; Glenn Talbot; Flash Thompson; Uncle Ben; The Vulture; and Mary Jane Watson. In the single Doctor Strange film (plus indications from that movies upcoming sequel that have been floated) there were or likely will be versions of The Ancient One; Dormammu; Baron Mordo; Nightmare; and Wong.

That is an impressive amount of four-color content from a curmudgeon who famously spurned interviews by and large, and who had mostly been self-publishing small press material over the last couple of decades. Steve Ditko was an original, and again like Kirby certainly deserved far more remuneration from the company that has made so much money off of his famous properties. The Catacombs extends its sincerest condolences to his friends and fans worldwide.

Those few highlighted in boldface were great creators that I am terribly glad to have had an opportunity to meet and chat with over their incredible runs in comics or in the case of Mr. Landau, his television and film work. The Catacombs extends a big round of condolences to their families, friends and fans all over the world!
Posted by Chuck Wells at 2:07 PM No comments:

I turned sadness into an Anthem!

Everything that we know so far about the open secret of Dragon Age 4, which Bioware is apparently still figuring out although it is reportedly “story and character focused” and contains some possibly controversial “live elements” which nobody who played the earlier entries in the series understands or no one affiliated with either Bioware or EA Games will clarify what that term means; but the sequel to the beloved gaming franchise is just around the corner (that is if you ignore the fact that Dragon Age: Inquisition was released in 2014, and the best case scenario for when Number 4 hits the shelves is likely to be 2021). That will be the longest dry spell in Dragon Age history: Dragon Age: Origins released in 2009 and Dragon Age 2 released in 2011. Yay for really big gaps in gaming franchises, whose last entry earned over 200 Game of the Year awards and subsequently ended on the most obvious cliffhanger for the next chapter? Seemingly increased tension among the remaining developers who stayed with Bioware after a mass exodus of so many others responsible for the creative heart of the previous entries (including the original men who founded the company) has prompted an existential crisis over what to do next with Dragon Age now that it has fallen into their laps??? Hmmm ….. weird …… but you just can’t make this type of shit up! 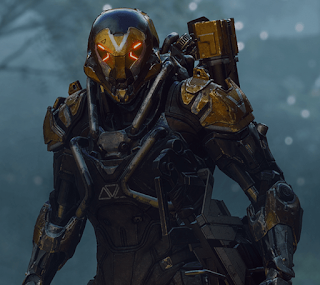 We are supposed to comfort ourselves with the knowledge that Casey Hudson has happily returned to the Bioware fold in the wake of their less than stellar release for Mass Effect Andromeda last year. Casey poured a lot into the earlier Mass Effect games, those were great by the way, and he even says that Mass Effect is his baby. Unfortunately, Hudson himself was one of the company reps who often extolled the many choices that gamers could potentially make in that popular franchise only to limit the final chapters selection to three bold color options for the confused hero, Commander Shepard? Maybe Hudson should have changed his baby’s diaper before sending the toddler out into the universe for its last hurrah? Let’s be nice and forget the fact that Bioware ran out of time while making ME3 and thus failed to provide proper closure over the fates of beloved franchise characters (or depending upon your perspective), showed a loyal crew acting in a manner that was significantly different than gamers expected based upon those decisions made over the course of three games and a dozen or so related dlcs?

Did you also forget about the huge customer backlash which leveraged the Extended Cut dlc by which Bioware managed a degree of damage control over such a hearty falling out with its customers too? No. I didn’t think that you had ignored that one.

Truly time will tell, but Bioware (owned by EA Games) has literally put all of its eggs in a single basket and currently suffers knuckle-popping damage given how tightly their fingers must be crossed over their upcoming new IP known as Anthem (due in February 2019). That game may or may not prove to be good and stand on its own; if it just didn’t look so similar to an already released game. That is probably Destiny to you.